Whilst out I received a text from Adam, saying he had found two Firecrests at Whitlingham.  As far as I'm aware there haven't been any previous records of Firecrest here (please contact me if you do know of any, I like to keep my records as accurate as possible).  I headed down to have a look that afternoon in the hope that they would still be around.  On my way I stopped off at the woodland viewpoint and scanned Thorpe Marshes, finding two Little Ringed Plovers and a summer-plumaged Dunlin on the scrape.  Carrying on I did a quick search of the area where the Firecrests had been seen, then picked a spot to settle down and keep watch.  Unfortunately I neither saw nor heard any, but I did see three Blackcaps (beating my earliest record by two days), a Willow Warbler and a lovely Bullfinch. 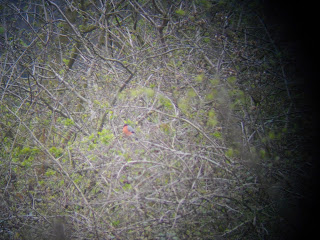 Having descended from the woods I scanned Thorpe again from a different angle, and was rewarded with a Green Sandpiper making its way around the shingle spit.  Walking back towards the broad a Marsh Tit was giving its spring call.  Finally on the meadows just past the visitors centre a Green Woodpecker was on the grass, as was a dark and nicely patterned female Pheasant vaguely resembling a female Black Grouse. Presumably its a tenebrosus type, the first I've seen in the area. 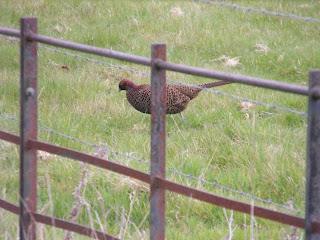 Yeah, I know there's a fence in the way.  When I tried to look through at a different angle it ran out into the field in that silly way that Pheasants do.
Posted by James Emerson