Trying to keep the patch list ticking over, I walked down to Whitlingham to check out areas where I was most likely to encounter something new.  Instead of walking down Whitlingham Lane I went up through Trowse Woods to check out the fields between the Ski-slope and the bypass.  These had been cut, but there was no sign of any partridges amongst the stubble.  Further along near Whitlingham Hall the land is at its highest, and I took a while to scan over the woods in the hope of soaring raptors, managing two Kestrels.

Walking back down the lime tree avenue I arrived back at the country park, and after a quick look over the Little Broad I headed to the moorings on the river to scan for Grey Wagtails. With none of these areas turning up the hoped for birds, I went on to do my usual lap.  The expected wildfowl were on the broad, although strangely there were no Greylags (presumably they were at Thorpe green). The Mallards were all in eclipse, and there were a couple of small ducklings still.  A few butterflies were around, and insect of the day was this Longhorn Beetle (Strangalia maculata).  On the way home I cut through the Riverside shops and found some Common Broomrape growing in the carpark near Argos. 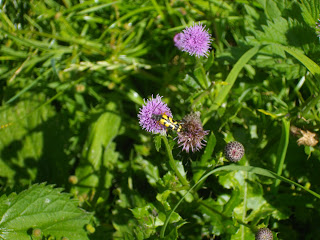