We attended a moth morning at Strumpshaw Fen, presided over by Ben. Two traps were put out, one in the woods and one at the edge of the reedbed, and between them they caught around 70 species.  There were the usual crowd-pleasers (Elephant Hawk, Poplar Hawk, Garden Tiger, Large Emerald) but also some scarcer species. The best one was probably Double Kidney, a Yare valley speciality, but several Wainscot species were new for me (Brown-veined, Bulrush, Webb's), and Clouded Magpie, Gold Spot and Alder Kitten were good to see too. Whilst going through the traps, two Crossbills flew into nearby pines, a Whimbrel flew over and a Nuthatch called nearby. 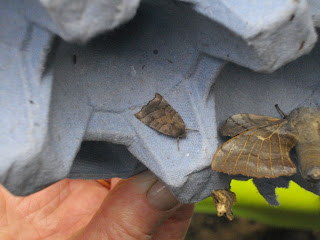