Whilst there has been a clearout of birds from the North Norfolk coast, another rare bird had been located mid-week at Caister-on-sea. Siberian Stonechats had until fairly recently been treated as a sub-species, but are now considered a full species in their own right (and indeed may be further split in the future). The Caister bird is a male, and a particularly nice looking bird, so Cathy & I decided to go and have a look.

We parked up near the lifeboat station and walked south through the dunes. A Common Stonechat flew out of some scrub, but we didn't see much more until we had reached a small group of people scanning inland. I set up the 'scope and quickly picked out the Siberian Stonechat perched on some brambles along the edge of the golf course. It remained faithful to this area, frequently flicking up to feed and returning to its favoured perch. It showed off the large, unstreaked rump patch that helps identify this species, and I even got an out-of-focus photo of it. 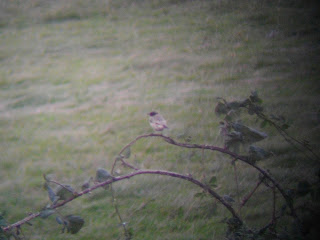 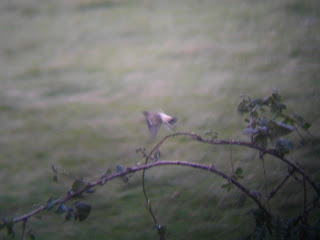 After having a look at the Stonechat Cathy went over to look out to sea. She had found a seal, but then called me over to check out a large bird she had found. I had a look and found that it was a 1st-year Swan - not the sort of thing you would expect to see offshore, although I had seen a couple of Whooper Swans off Titchwell a few years back. Distance prevented me from identifying this one conclusively (I suspect Whooper), so I would be interested if someone got better views and knows for sure. Cathy had also noticed some large puffballs, which based on the long stipe and 'spikiness' were Pestle Puffballs, although in slightly unusual habitat. We also saw Dusky and Grassland Puffballs on our way back to the car. 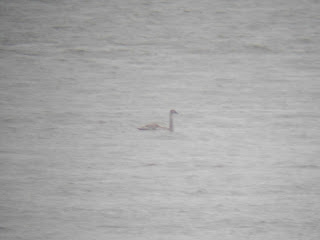 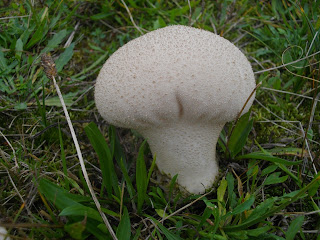