Whilst at work during the week, I had read about the recent influx of migrant birds, particularly along the north Norfolk coast, with a degree of envy. On Sunday I had kept the day clear to attend a NNNS walk at Burnham Dunes, which would include the opportunity for a bit of birding, but was more aimed at plants and fungi. As I had been looking forward to this walk I decided to go ahead as planned, but to leave early and spend a bit of time in Wells Woods first.

Upon arrival I was surprised that dog walkers outnumbered birders, but this state of affairs didn't persist for too long. I decided to devote the bulk of my time to looking for the Blyth's Reed Warbler found earlier in the week, and after hearing it call for a while I eventually got brief views. With time running out before I had to head to Burnham I walked west along the main track, stopping at regular intervals to admire the Goldcrests that adorned many branches. Despite Connor telling me that the Hume's Warbler and Pallas' Warbler were still present further along, I was unable to see either in a brief look before heading back to the car.

I parked up at Burnham Overy Staithe and met Tony Leech who was leading the NNNS walk. We were also accompanied by Andy Bloomfield, who works on the Holkham estate. On the walk out to the dunes Andy stopped to look at a bunting he had seen, which he had heard give a ticking call. Unfortunately it flew out of sight, but he called a friend to come and check it out, and they confirmed that he had found a Little Bunting! As at Wells there were lots of Goldcrests, only here they were flicking about in the Sueada, and later on also amongst the moss and lichen of the dune slacks.

One of the groups that the dunes here are particularly known for are the Earthstars. We saw a minimum of two species, possibly two more (there can be quite a bit of overlap between species, so Tony took samples of two to check microscopic features before confirming their ID). The two definite species were both new for me, Tiny Earthstar (Geastrum minimum) and Dwarf Earthstar (Geastrum schmidelii). The latter species was found in a restricted area of the dunes that we were able to enter whilst accompanying Andy. Here we also saw a pond containing Natterjack Toad tadpoles. Apparently the toads had spawned late, and unfortunately these tadpoles are likely to perish as the weather gets colder. 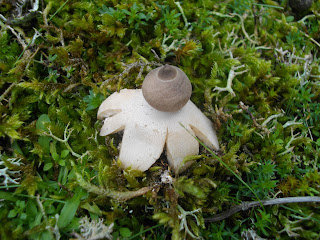 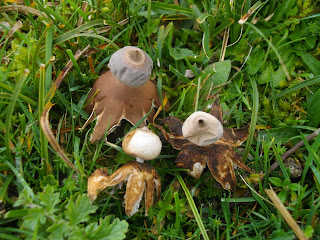 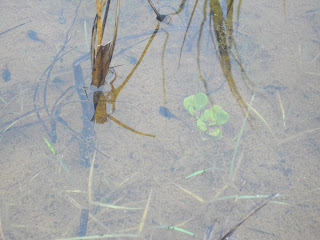 In addition to the Earthstars we saw a number of other species associated with nutrient-poor grassland. These included five Waxcap species (Blackening, Dune, Snowy, Spangle and Parrot), a yellow spindle sp and some Enteloma sp. Back in the old dunes we came across a large area of Winter Stalkballs (Tulostoma brumale), a species I saw for the first time last year at Holme Dunes. 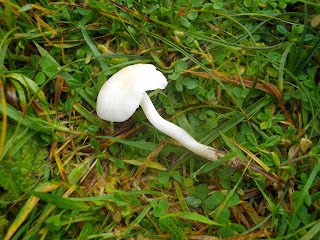 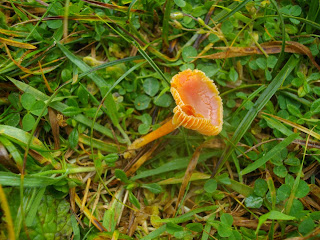 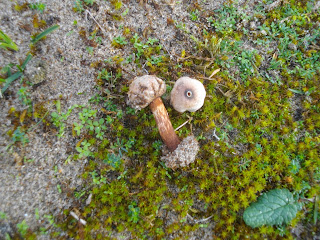 Having searched the old dunes, we headed northwards into the loose sand of the yellow dunes. We had a rough idea of the sort of species we hoped to find here, and managed to see almost all of them. I was pleased to see Dune Stinkhorn, as my only previous sighting had been of a dessicated specimen at Holme a year ago. Field Bird's-nests were common, growing on old Marram debris. Dune Mushroom, Dune Cavalier and Dune Brittlestem were both expected, but the small ink cap Coprinopsis ammophilae growing amongst the sand caused excitement, as it appears to be the first Norfolk record (there are no records on the county database, but a separate national one has to be checked too). 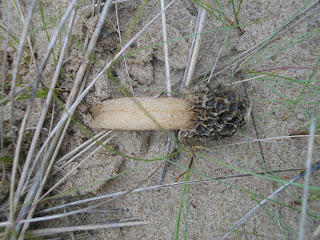 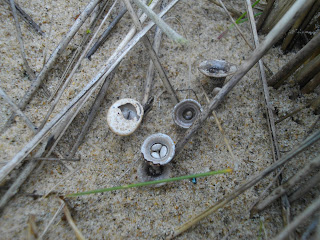 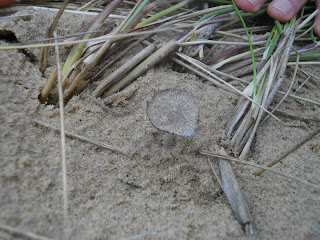 On the way back it was good to meet Robert Yaxley on the coastal footpath. A crowd had gathered to look for the Little Bunting, which was currently out of sight, but after a full day I decided to head home rather than wait for it to show.
Posted by James Emerson