This week has seen large numbers of migrant birds arriving at the coast, but before worrying about those there was this months WeBS counts to get done. As I pulled into the car park at Whitlingham I thought it was odd that there was a caravan parked up, until I looked around the rest of the car park, where many more large caravans were also positioned. The penny dropped that travellers had taken over and set up camp, so I had to turn round and managed to find a space in the next car park along.

Before leaving the car park I heard my first Redwings calling as they flew over. Along the edge of the little broad there were lots of reddish-orange Tawny Funnels (Lepista flaccida) growing amongst the leaf litter. A Water Rail squealed from the broad edge, and a Grey Heron perched up on one of the bales floating in the water. Some more fungi were growing between the two broads, this time Clustered Domecap (Lyophyllum decastes), a new patch species for me. 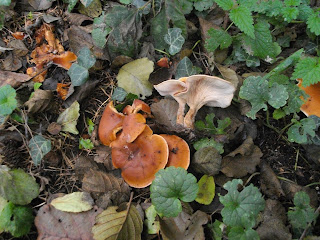 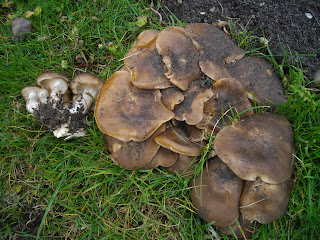 
There has been a significant increase in wildfowl since last month, although nothing particularly spectacular. In terms of ducks there were 81 Mallard, 43 Gadwall, 27 Tufted Ducks, 6 Pochard and 1 Teal. Other species included 103 Coot, 2 Great-crested Grebes and 2 Little Grebes. 41 Cormorants was a large non-roost count, and interestingly a group of 16 were fishing together, a behaviour I seldom see here. A Kingfisher flew past, 2 Cetti's Warblers called, and several Siskin flew over.

The most interesting avian sighting of the day occurred as I scanned across to Thorpe Marsh. Seven Teal were visible on the spit, when I noticed some black-and-white stripes showing amongst the vegetation behind them. I expected it to be a Water Rail, so was surprised when a Red-legged Partridge came into view! Viewing through some trees and in the rain prevented me from getting more than a record shot of this slightly out-of-place bird. 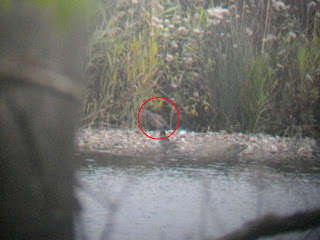