Sunday was UK Fungus Day, and we spent the afternoon of it at Brandon Country Park, just over the border into Suffolk. Brandon was hosting a Bioblitz, organised jointly with NBIS and Breaking New Ground, a lottery-funded project aiming to connect people with the landscape and wildlife of the Brecks.

Bioblitzes are a relatively recent concept, and basically involved trying to record as many species of wildlife as possible within a set time period, usually 24 hours or less. They vary quite a bit - at one end of the spectrum lots of experienced recorders go off and get on with recording their specialist areas, whilst at the other end there are lots of child/family friendly events, which enthuse young people about nature but don't generate many records. This one was nicely balanced, with regular guided walks and events, but also a number of very knowlegeable recorders, many of them from the Norfolk & Norwich Naturalists Society.

As Cathy & I hadn't been to Brandon CP before we called in to the visitors centre to see what had been seen already. We then set off on a walk around the nearby woodland, paying particular attention to the fungi we saw. Cathy found a number of interesting species, the highlight being Green Elf Cups. This fungus stains wood green, but it is less common to see the fruiting bodies growing from it. I had mentioned this to Cathy when we saw some of the green wood, and she promptly went and found some of the small cups growing a nearby small branch. 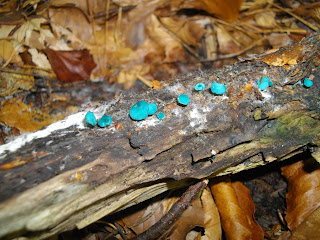 We headed back to the visitors centre and added some of our sightings to the species lists, before stopping for lunch. After lunch we headed out to look for more fungi in an area near the playgrounds. Here we saw a good range of different species to our first walk, including White Saddle (Helvella crispa) and Elfin Saddle (Helvella lacunosa). As the bioblitz drew to an end we returned to the visitors centre, where someone had brought in two Pale Tussock moth caterpillars. We also saw a Bank Vole and a couple of different species of harvestman (identified by Andy Musgrove). When we left 254 species had been recorded, with more to be added as further identifications are made at home. 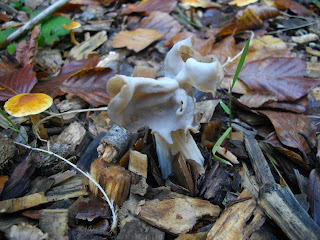 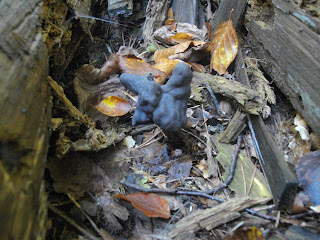 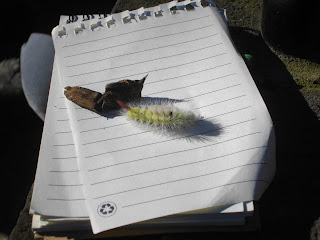