Cathy & I headed out today to have lunch at Natural Surroundings. Whilst signposted as a wildflower centre, the best bit for many people is the little cafe in the woods, where you can have lunch whilst watching woodland birds on the feeders.

On the way we called in at Earlham Cemetery, where I had got directions from Ian for Jellybaby fungus (Leotia lubrica). This was a new species for me, although Cathy wasn't particularly impressed with its similarity to actual jellybabies, despite my demonstration of just how similar they are. 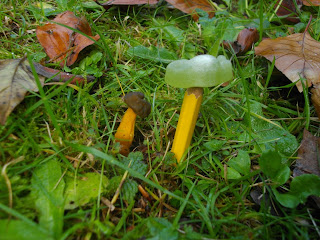 At Natural Surroundings we had some big slabs of cheese on toast whilst watching Nuthatches and Coal Tits on the bird feeders just outside the window. After lunch we went out into the nature reserve, having a walk around the wooded areas before reaching the river. Here we saw some Brown Trout in the River Glaven. We stopped in the hide, but didn't see much from it. On our way back to the cafe a large flock of Siskins called from the trees nearby. 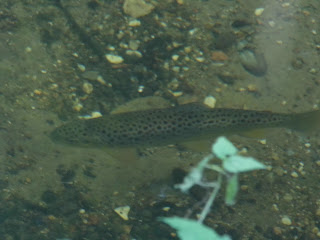 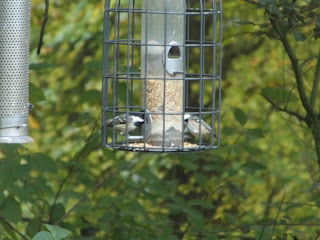 On our way back to Norwich we decided to call in at Holt Country Park. Near the car park I stopped to look at the remains of Golden Bootleg Fungus, which looked like it had encountered someone elses' boot. Luckily I had seen photos of it before the damage, so knew what it was. We headed off into the totem pole clearing, which always used to be good for fungi when I was younger. I was a bit surprised to see a woodland garden - presumably it has been there ages but on all of my recent visits I have always headed off towards the pond or around the edges. 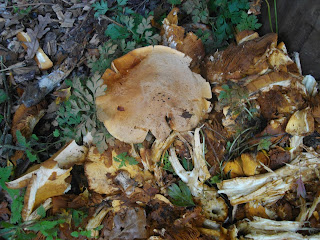 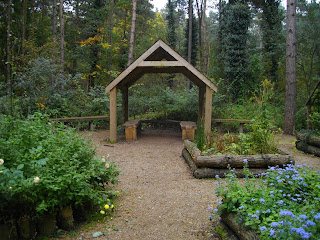 The garden proved to be full of fungi. Large amounts of Hairy Curtain Crust were growing on the wooden edging, and Cathy set about finding lots of fungi, including Orange Peel fungus and some impressive Redlead Roundheads. We saw many different species, including an old favourite of mine, Ear Pick fungus. This species grows from pine cones and has spines rather than gills. 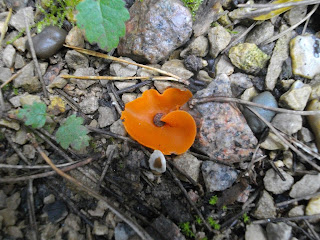 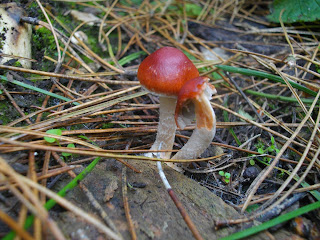 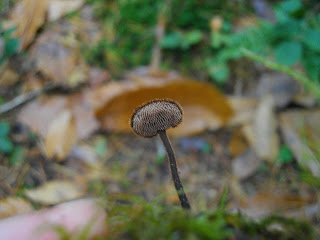 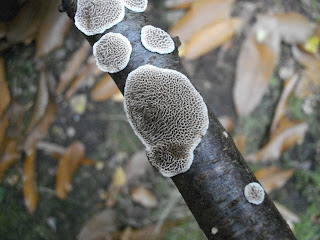