We stayed over with friends on the 31st December, so awoke in Badersfield. Very few birds flew over whilst I was looking out of the windows, Woodpigeon and Black-headed Gull the only recognisable ones. As we left I had to stop to de-ice the car, something of a novelty in recent times, and we added Blue Tit, Long-tailed Tit, Rook and Jackdaw. Back on the North Walsham-Norwich road a Grey Heron flew over from the direction of Horstead mill, and the most interesting bird of the journey was a Little Egret flying over the White Horse at Crostwick.

After calling in at home (adding Magpie on the TV aerial nearby) we headed to Whitlingham with Margaret, which I shall post about separately. After a walk there and some food in the cafe, we set off for a leisurely circuit taking in Acle, Horsey and Walcott.

Along the A47 we picked up the expected Kestrel and Pheasant, before turning off at Acle. Usually there are Lapwings in the fields here, but we could only see corvids and Starlings. Some Red-legged Partridges near Martham were the only addition up to Horsey, where a Marsh Harrier was hunting over the marsh, appropriately enough. Around 30 swans were feeding in the distance, but there was nowhere convenient to stop and they looked like Mute Swans.

Carrying on to Horsey Corner we got stuck in a queue of traffic. It became apparent that this wasn't due to an accident, it was due to the large number of people wanting to park up to see the seals. A field had been converted into a car park and was heaving with cars. I was a bit bemused by this. The seals at Blakeney Point have been popular for ages, but never elicited this type of reaction. Could the difference really be it was a bit cheaper to pay for parking than a boat trip. I know that I should probably be pleased that so many people want to connect with nature in this way, but the impact of this sheer volume of people on the local roads and dunes are hopefully being monitored. Of course a big part of it could be the 'January the 1st effect', where everyone goes out for one walk a year. Apparently North Norfolk was also very busy, which seemed to annoy some birders visiting from out-of-the county, with no apparent sense of irony.

Anyway, as I considered all this (and read the new-looking Horsey Estate seal viewing area sign) a Swallow flew over the car heading north-west. I knew there had been one at Winterton recently, but it was still a complete surprise to see it here. I got it in my binoculars to check that it wasn't Red-rumped, but was chuffed to have 'just' Swallow on my January 1st list. Once we got past the queuing traffic we carried on, and as we reached Sea Palling I suggested we have a look for the Cattle Egret nearby. There was no sign of it (I later found out it hadn't been seen all day) but there was a flock of Fieldfares and Starlings milling about, which was nice to see. Further along the road we saw a black tenebrosus Pheasant and a small skein of Pink-footed Geese flew over. 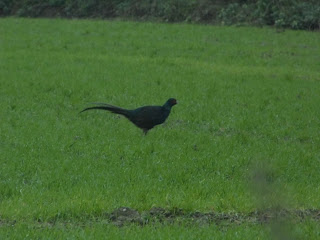 We back-tracked a little and headed to Walcott, but there was no space to park along the front and no sign of the Turnstones on the wall either, so we headed back to Norwich. My final day total was 47 (+ Robin heard only!), a nice start to the year.
Posted by James Emerson