Every month Chris Durdin leads a guided walk around Thorpe Marsh on behalf of the Norfolk Wildlife Trust. Because the walks are typically during the week I am usually at work, but as I was off today I decided to go along. After a sharp frost the weather warmed up nicely, and around 15 people were present. It was good to see several readers of my blog and/or people that I have communicated with via email but not met in person before. At the end of Bungalow Lane were some House Sparrows, a species that I haven't seen actually on my patch in over five years. We also stopped to look at some Cherry Plum blossom, a species often confused with Blackthorn.

We walked along Bungalow Lane and then west along the wooded edge of the marsh, stopping to admire a small Scarlet Elf Cup growing on the edge of the path. Scanning the broad the highlight were two drake Shoveler amongst the commoner ducks. A Cormorant was drying its wings on the spit, and I was able to describe how you would check the gular angle to determine the subspecies - this one was a sinensis bird. We paused to listen to a nearby Cetti's Warbler, which predictably stopped calling, and saw some Yellow Brain fungus growing on a riverside Ash tree.

We stopped to scan from the shingle broad edge, and one of the group spotted a Chinese Water Deer walkin galong the edge of the broad. A large queen bumblebee flew past, unfortunately not stopping long enough to identify it. High over towards Broadland Business Park a Buzzard was soaring, being mobbed by a Carrion Crow. As I watched it in the telescope it flew past two more distant Buzzards. We also saw a Sparrowhawk flying over the railway line. Our next stop was to see some egg-laying scars left by Willow Emerald Damselflies, and some Snipe were put up off the marshes. 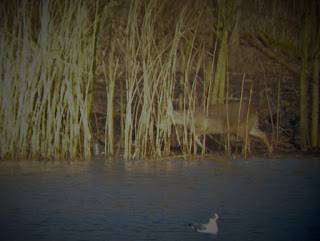 Our final sighting of note was of two Great-spotted Woodpeckers. I spotted them in the wooded area and initially thought they were a pair as they followed each other around, mimicking each other as if in courtship. It was only when Chris got better views of them and saw that they both had red on the back of the head that it became evident they were actually both males, and having a territorial battle. We watched them follow each other around the trees for a while before heading back along Bungalow Lane and across the railway. It was a very pleasant walk, and one I would recommend to others, particularly if you are not familiar with the area. The next walk is on Wednesday 30th March, and the remaining dates can be found on the right hand side of the Thorpe Marsh website here.
Posted by James Emerson