The short winter days can be frustrating, with no opportunity to look for wildlife in the evenings. Now we are near the end of February this situation is starting to change, allowing the possibility of brief excursions. On Tuesday I got a phonecall from Justin, telling me that he was watching a Bittern at Whitlingham. This bird has been reported a couple of times so far this year, but presumably been present for much of the winter, unobtrusively going about its business amongst the reeds. I decided to make the most of the sunshine and slightly later sunset by hurrying down to Whitlingham after work.

I power-walked along the southern edge of the broad, stopping to look at my first patch Oystercatchers of the year standing on one of the floating rafts. A Kestrel flew low over the picnic meadow. The reedy areas along the northern shore of the conservation area bay cannot all be viewed from one place, so I stopped in several places and scanned, hoping that the different angles might help locate the Bittern. With no luck west of the island, I carried on past the island and set up my telescope on the area of reeds just to the east.

The area I was focusing on hosts quite a large Magpie roost over the winter. As I was going to be staring in that direction for some time, I decided to count the roosting Magpies. Some were alrady in the bushes, so I started by counting all of the perched up birds (around 30), and then counting the rest as they flew in. I ended up with a count of 148, easily my highest ever, although a way short of the record count here. With the light beginning to fade, I started to walk back, but stopping again west of the island to scan. And there it was, the Bittern, standing amongst the reeds. It took a step right to the edge of the broad then turned side on, clambering onto some debris before launching into flight. Its legs dangled down like a giant Water Rail, suggesting that it wasn't flying far. A brilliant end to a very pleasant evening. 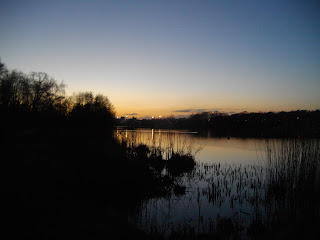