With temperatures dropping overnight (including some brief snow flurries) I was interested to see if any birds were on the move at Whitlingham. During my stay I was treated to sunshine, drizzle and on several occasions hailstones, which began to fill up some Scarlet Elf Cups I was photographing at the time.

I started at the country park, where I hoped the gulls would be loafing undisturbed. I was concerned to see a large water search & rescue van parked on the slipway, but there didn't appear to be any rescue in progress, so perhaps they were doing some training. The only ringed Black-headed Gull I saw was regular bird white J5JE. I did notice a metal-ringed Mallard, but only managed to partly read the code before it headed off onto the water. Earlier in the week Dave Leech of the BTO had mentioned that relatively few Egyptian Goose rings are read every year, so I made sure that I got the codes from the pair on the southern shore of the broad and have reported them. I have heard back regarding one of the so far - it was ringed at Whitlingham in December 2010.

Having scanned through the birds on the broad I headed off into the woods. A Coal Tit showed well in the trees along the telegraph pole alley, and some Goldcrests called from high up in the pines. Near the lime kiln I paused to look for the Scarlet Elf Cups, and found several large specimens growing on a branch. The scarce bracket fungus Fomitopsis pinicola was also back, growing on the gatepost near the road. 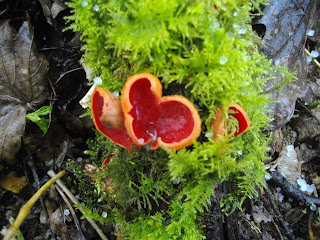 I carried on along the lane to Whitlingham Marsh, where despite another shower I had a brief look for the Siberian Chiffchaff that had been reported a few days previously. I couldn't see or hear any Chiffchaffs, so I completed a circuit of the marsh, walking back along the riverbank. Back at the Great Broad I saw four Kingfishers, a nice way to end my visit. 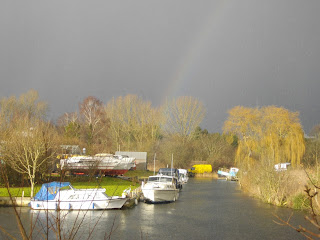