The recent unsettled weather meant that I went to Whitlingham on Saturday hoping that something a bit unusual might be present or flying over. I started with a scan of the scrub near the Little Broad. Many of the bushes here are covered in the common yellow lichen Xanthoria parietina, and whilst looking at the lichen I noticed that some of the apothecia (the round 'jam tart' shaped fruits) were covered in a sooty black. This is a paristic fungus called Xanthoriicola physciae, which is very common apparently, but I'd never recorded it before. Certainly a bonus species to look out for if you record all the wildlife in your garden or local patch. 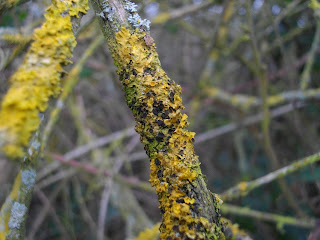 Spring flowers were out in force - Snowdrops, Lesser Celandine, Primrose, Daffodil and the unobtrusive green flowers of Dog's Mercury. 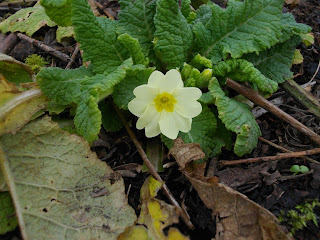 The local model yacht club were using the slipway, so there were no gulls to check through as I walked around the Great Broad. Graham (@Dissbirder) had called in for an hours birding, so we had a chat before scanning the area around the main island. One Little Grebe was present east of the island, but duck numbers had decreased since my last visit. It was slightly better at Thorpe Broad, with reasonable numbers of Pochard, Tufted Ducks, Teal and Gadwall. Looking from the path down to the bird screen I counted at least nine Shovelers hauled out and asleep on the island.

When I finished my lap the yachters had gone and gulls were returning to the slipway, so I went to check for ringed birds. I spotted the Norwegian gull with a white ring J5JE, a bird that can be seen here most winters. I then spotted another ringed Black-headed Gull, this time only a metal ring. These require close views and patience to read, so I found a place to watch from and set about reading the code on the ring. I was a couple of numbers in when I realised that the ring had been put on upside down! This made reading it more difficult, but as I remembered a previous gull reported to me had an upside down ring, I suspected it would be that one. I only managed to read "..2109.." before it flew off, but thanks to Justin (who managed to read the ring on Sunday) and James Appleton (who had seen the gull before in 2013 and 2014) I now know it is a Finnish bird, and another returning individual. 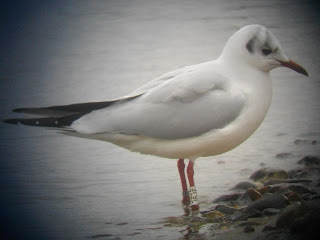 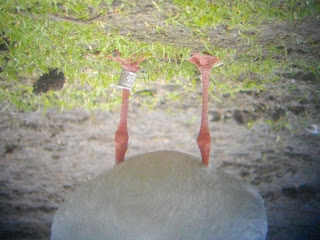 Easier to read if you stand on your head.
Posted by James Emerson