On Saturday the Norfolk Fungus Study Group met for the first time this year at Wheatfen. There was a good turn out, and David the long-serving warden took us through the woods to an area called Tuck's Wood that is off-limits to the public in the hope that we could contribute some additional species to the site records. Despite the time of year we found lots of species, several of which I've not come across before. As expected most of them were growing on wood, with a tendency towards brackets and crust fungi rather than gilled species. Several specimens were taken for determination, so hopefully there will be a few more additions to my preliminary list too.

The first new species for me is called Glue Crust (Hymenochaete corrugata). It would be very easy to miss, but gets its name from the habit of growing between branches, sticking them together. 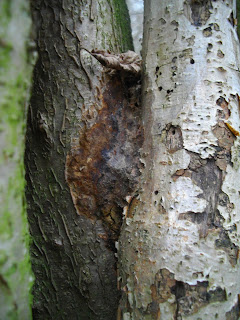 The next new one was Hypoxylon petriniae, a rather non-descript brownish crust fungus on Ash. 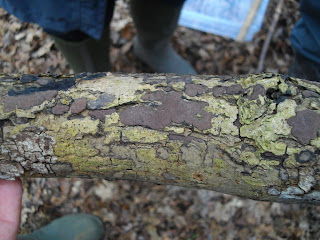 The third new species was one I've wanted to see for a while. It was an old specimen of Shaggy Bracket (Inonotus hispidus), which was black and hairy-looking. Nearby I was also shown an Artist's Bracket with galls underneath. These galls are caused by a scarce fly called Agathomyia wankowiczii. It is one of very few (possibly the only one?) insects to cause galls on a fungus rather than on plants. It is also useful as it only grows on Ganoderma applanatum, which can otherwise be difficult to separate in the field from the commoner Ganoderma australe. 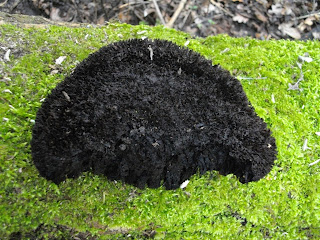 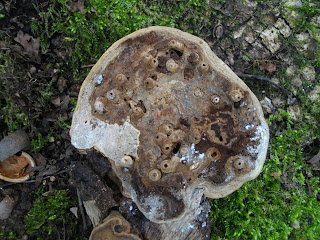 Finally from the initial batch of new species was Fenugreek Stalkball. Apparently these small stalkballs do smell of Fenugreek when dried, but these were wet and didn't. 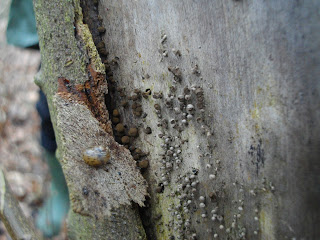 Whilst we were concentrating on fungi I did see a new flowering plant, Opposite-leaved Golden Saxifrage, which is very common around part of the reserve. Alex Prendergast also identified a Scaly Male Fern as D. a. cambrensis (Golden Scaly Male Fern), which I've not knowingly seen before. Some members stayed for lunch and a microscopy session in the afternoon, but I headed home after a successful morning. 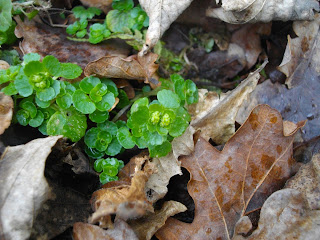