I called in briefly at Whitlingham around midday, mainly to check out the gulls. This was largely scuppered as the model yachters were using the slipway again, so the gulls were on the water. I scanned through as many as I could find in the hope that the Mediterranean Gull present on Monday would be amongst them, but I couldn't see it. I headed along the south shore as far as the island, scanning the bay and the reed edges, 6+ Shoveler and c30 being the pick of the birds. On my way back the gulls were beginning to return, but no rings were visible.

After returning home for lunch I then headed to Roydon Common, hoping to see a Pallid Harrier. Twice in December I had looked for this overwintering bird at Flitcham. On the first occasion it wasn't seen all day, and the second time the area was closed for a royal shooting party. I had decided I wouldn't try a third time, but in recent weeks the same bird had been seen coming into the harrier roost at Roydon daily, and this seemed a better bet.

Doing my research I noticed that the Pallid Harrier arrived at Roydon at varying times, anywhere between 15:00-17:00. To be on the safe side, and also because it was an overcast day, I aimed to arrive about three. With no sign of any raptors, I passed ten minutes checking the pony dung for Nail fungi. I didn't find any (again), but I did find some Dung Roundheads. A lichen-covered tree also turned up some bright pink splodges of Illosporiopsis christiansenii, which is probably common everywhere but rather under-recorded. 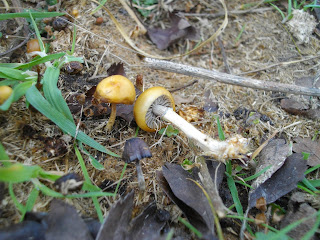 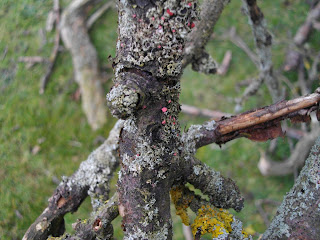 I decided to head along to a viewpoint overlooking the area that the harriers roost and wait until dusk. It was only about 15:20 when we looked up at a Kestrel flying over. Suddenly another bird of prey appeared below it - a ringtail, and more specifically the Pallid Harrier! It had appeared over the ridge from the south, which we weren't expecting, and soared around close to us, giving exceptional side, underpart and upperpart views as it glided round. It flew into the distance and landed on the ground, barely visible. A bit later on the Pallid Harrier gave prolonged flight views before perching on a post. It really was a beautiful bird, and I was glad that I had made the effort to look for it again. I also saw a ringtail Hen Harrier and a Barn Owl before heading back to Norwich. My photo attempts were rubbish, so I've attached a drawing instead. 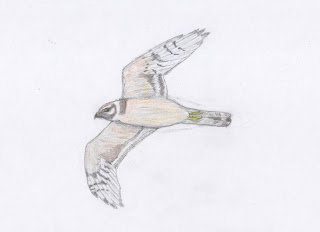