After dropping Cathy off in Tuttington I had a couple of hours to spend in north-east Norfolk, so I decided to head to Pigney's Wood. As with Cley and Bowthorpe Marsh the previous weekend I feel a bit of a connection with Pigney's, as when I was a young boy I came out here with a mini-bus load of other North Walsham residents to plant trees. The younger woodland is probably the least interesting part of the site, but its a nice feeling to know that you were part of creating a small bit of the natural landscape.

It was raining as I arrived, so I headed to the hide in case it got harder. You can see how that went: 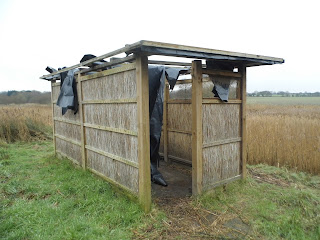 On the way down to the hide a flock of Siskins flew over, and the hedge was packed with Redwings. The hide looks out over a nice newish area of reeds and open water. Two Greylag Geese and some Mute Swans were the only birds visible, but the star attraction was at least one Bearded Tit, which has been overwintering here (up to four have been present). Unfortunately it/they didn't show, but did call several times from near the middle of the reedbed. When I lived in North Walsham I never thought I'd record this species anywhere nearby, so this bit of habitat creation gets a thumbs up from me.

After a while I gave up waiting for the Bearded Tit, and moved to the edge of the canal to walk along the southern edge of the site. About halfway along a Water Rail flushed from the adjacent ditch, flying straight up like a helicopter with long legs dangling beneath, moving horizontally across into the reeds and then dropping out of sight. I took the bridge across the ditch, pausing to watch a male Reed Bunting perched on a dead tree. I saw an interesting fungus (possibly Split-gill), annoyingly out of reach across a dyke. 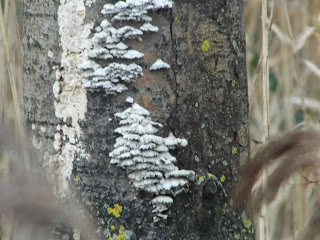 I headed up to the old barn, seeing a pair of Bullfinches in the hedge. A quick walk around in the old wood showed that the Bluebell leaves are beginning to emerge, but the woods were rather quiet. Walking back to the car park I noticed some interesting spots on Privet leaves, and a new lichen for me, Ramalina fastigiata growing on one of the 'new' trees. I look forward to returning in the spring, when there should be some invertebrates around to add to the interest. 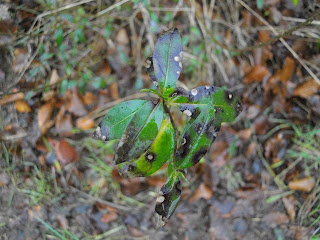 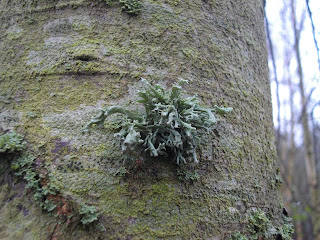