Late afternoon on Sunday Cathy & I decided to go out for a bit, and with nowhere in mind I suggested Ormesby Little Broad. The pathway between the car park at Filby and the lookout point over the broad is particularly scenic, but the main reason for visiting was to see a long-staying Red-necked Grebe. I had a quick look through my records and realised that I hadn't actually seen one since 2011, and had never seen a summer-plumaged one.

We arrived at the car park at around 17:30, and I was a bit concerned to see rather vague signs saying that the car park "may be closed between 5pm and 8am". I decided that as it had gone 5 and the car park wasn't shut, it was probably OK until dusk, when it stated more definitely that you shouldn't park. After a quick scan from near the road we headed along the path towards the lookout point. Last summer we came here for Lesser Emperor dragonfly and the flowers were alive with insects. Today there were no flowers out, and the main distraction were the many fish that jumped out of the dyke trying to catch midges.

We met a man heading back to the car park, who said that when he had seen the Red-necked Grebe it was near the reeds in the corner near the road. Nevertheless we carried on to the end of the path to view out over the broad. The broad was lit up with hazy sunshine, and four Swallows chased and chittered overhead. Most of the birds on the water were Coot, Great-crested Grebes or Tufted Ducks, although there was a female Goldeneye off towards what used to be the Eel's Foot Inn (now the Boathouse). Cathy called me over to look at the huge number of fish (Common Roach I think, though I stand to be corrected) beneath the platform. 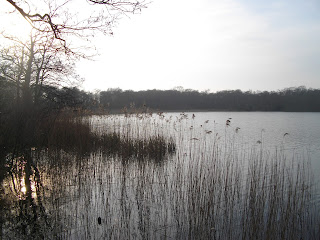 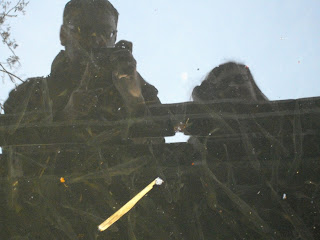 We headed back towards the car park, scanning the broad through the trees were possible. A Song Thrush, Goldcrest and a couple of Chiffchaffs were all singing, although I didn't hear any Blackcaps or Willow Warblers, both of which have returned to some sites by now. Initially there was no joy scanning from the road, but just before I called it a day I spotted the Red-necked Grebe whilst scanning through the trees. It spent most of its time preening, but showed relatively well in the end. Satisfied with out bit of nature for the day, we headed home. 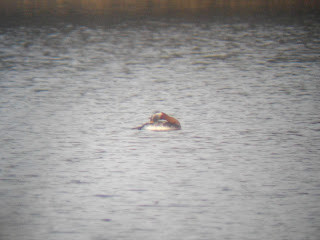 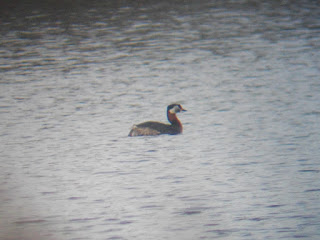