Whilst at Whitlingham on Monday, I had a phone call from Ricky who had been to Thorpe Marsh and seen Sedge Warbler and House Martin amongst other species. I therefore made time to pop in during a sunny spell and have a look. There were no hirundines at all whilst I was there, but I did hear two Sedge Warblers, beating me earliest date by two days (although as 2016 is a leap year, technically only by one day). My earliest House Martin is actually 14th April, so I've still got another week to beat that. A Kingfisher flew across the broad, looking even more spectacular than normal with the sun glinting off the blue feathers.

I kept an eye out for insects as I walked round, seeing Garden Bumblebee, Common Carder Bumblebee and a female Hairy-footed Flower Bee. Two Small Tortoiseshells were also flying about the site. I stopped to chat to another birder, who mentioned that he had seen some newts in one of the dykes. Mark had also seen them and gave me directions, and after staring amongst the Water Soldier I managed to see a couple of them. They were Smooth Newts, a new patch species for me, taking me up to 995 in total. A sunny April day with a good migrant bird (Garganey, Wheatear, Ring Ouzel, Yellow Wagtail) and some insects flying around could well be enough to get me to the 1000 mark I reckon. 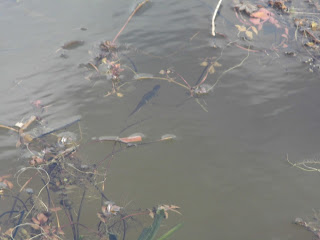 Incidentally the Sedge Warbler was my 80th patch species of the year, so I had a look at my records to see where that ranked against previous years. It turns out that this year has been the 3rd fastest to 80. The best year was understandably 2010, probably the best ever year at Whitlingham, when we had all 5 grebes, GN Diver, Smew, Goosander, Ring-necked Duck, Ruddy Duck etc. The second best year was 2012, when I saw Smew, Goosander, Ferruginous Duck over the winter, and early Little Ringed Plover and Green Sandpiper. My week-by-week graph is below: