Monday's visit to Whitlingham had been successful in finding hirundines, but later on in the evening a singing Firecrest had been reported. Firecrests are exquisite birds, and a species I've still not seen at Whitlingham (or in the Norwich area at all), so I headed back to Whitlingham early on Tuesday morning. It was a relatively warm day and there was a lot of bird song, so I was fairly optimistic. Just past the slipway I noticed a Treecreeper speedily working its way up an Alder. Seeing a gap in the branches above it, I focused my camera there and managed to get one photo where it wasn't obscurred! 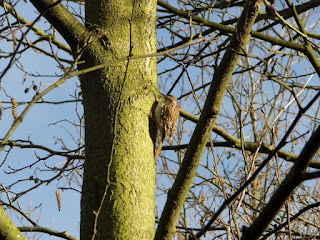 On the Great Broad itself there seemed to be even less Tufted Ducks than before, but six Sand Martins were flying low over the water (presumably last nights birds, but possibly new arrivals passing through). I heard some 'chakking' and looked up to see two small flocks of Fieldfares flying north-eastwards. The winter has been a rather mild one, so these were my first patch Fieldfares of the year.

I loitered around the east end of the broad for a bit, hoping to see or hear the Firecrest, but to no avail. Whilst picking through the rest of the birds I got good views of Chiffchaff, Long-tailed Tits and a further three Treecreepers. Continuing my walk round I stepped off the path to allow some walkers past, and in doing so flushed a Red-legged Partridge! An unusual bird here, but one that does turn up at random intervals, being present nearby on farmland to the south of the sewage works. A final overdue new patch bird of the year was a Reed Bunting, calling from the north shore of the Great Broad.
Posted by James Emerson