There is a strong argument for April being the best month for birds at Whitlingham, so a walk around the CP to carry out April's wildfowl counts seemed to be the best way to dispel the frustration of Norwich City's latest defeat. I hadn't been at Whitlingham long when I bumped into Mark Eldridge, so asked me if I had heard the Lesser Whitethroat singing from some scrub nearby. I hadn't, so after a quick catch up I headed off to have a look. Lesser Whitethroats are scarce at Whitlingham - typically there might only be one or two reports a year, so I was grateful to Mark for giving me directions, and in the end I got good views as it sung away from a small tree.

I went back to the Little Broad and carried on, only to see Mark again. He was listening to a 'mixed singer' Phylloscopus warbler. It appeared to be a Willow Warbler, however in addition to Willow Warbler song it was also giving Chiffchaff song, and occasionally a combined "chiff-chiff-do-do-do-do-do" half-and-half song. Incidentally Drew had mentioned this bird to me last week, but at the time I hadn't heard it do the Chiffchaff bits. It was a very interesting bird to listen to, but after a while with no song I had to carry on with the WeBS count.

At the west end of the Great Broad there was a pair of Egyptian Geese with five goslings, which are always nice to see. I haven't seen the two goslings that the first pair had for a while now, so I fear the worst for them. The broad was fairly empty, with 68 Tufted Ducks mostly condensed into the east half (perhaps the west part had been disturbed earlier in the day?) As I approached the island I scanned further down and noticed eight terns hawking insects over the water. The first couple were definitely Arctic, but as we sometimes get mixed flocks of Common and Arctic Terns I waited until I was a bit closer before putting the news out that all were Arctic Terns. They were mesmerising to watch as they swooped back and forth, replete with their long tail streamers. 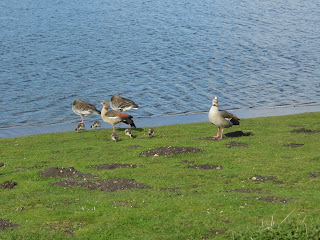 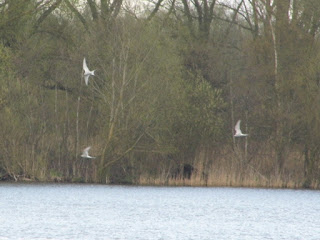 I waited for Justin to arrive and see the terns before I continued the count. There wasn't much visible at Thorpe, although pairs of Gadwall and Teal were still present on the broad, along with another 11 Tufted Ducks. Further round I scanned the opposite shore of the river for a Muscovy Duck that has been around Thorpe Green for a while. There was no sign of that, but I did find an orange-ringed Mute Swan. Many of the Whitlingham swans are ringed, but all previously had just been metal ringed local birds, so I was pleased to find one that has travelled a bit further. I have reported it to the East Anglian Swan Study Group and await details. 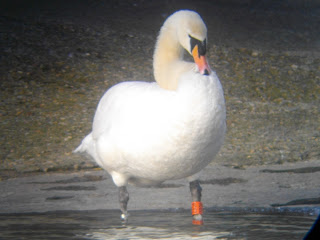 It was beginning to cloud over, but there was still time to see two more nice birds before the rain arrived. The first was a Green Woodpecker that showed well in the young trees in the conservation area, allowing me to digiscope a few photos. The second was a male Linnet that was singing from a tree along the riverbank, rounding off another excellent patch visit. 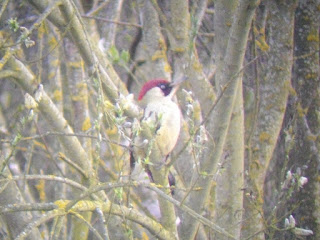