Having not been to Whitlingham over the weekend I was keen to go at some point in the hope of seeing a (still relatively early) House Martin. As two Little Gulls had been reported on Monday afternoon I headed down after work. There was no sign of any Little Gulls, but I did see an adult Yellow-legged Gull with some Herring Gulls. I scanned across to Thorpe, seeing a flock of Swallows and some frustratingly distant Martin sp.

On Tuesday afternoon Drew Lyness found a flock of eight Common Scoter at Whitlingham. Having never seen more than one at Whitlingham I was keen to see them, and again called in after work. Seven of the Scoter were still present (one female had flown off east). Drew was still onsite and we watched them swim about and diving regularly. Having gone through the records it appears that this is the record flock size here (previously four) and the first April record, despite there being several in late March. 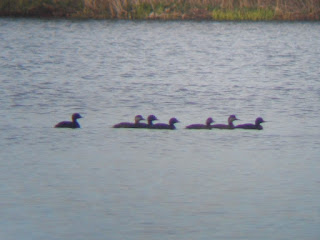 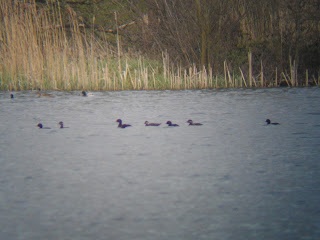 As the weather became more overcast a flock of Swallows became visible, and this time with the aid of my telescope I finally picked out my first House Martin of the year over towards Thorpe Marsh. There was another bonus bird whilst I was talking to Drew, a Little Egret flying eastwards. There were lots of Chiffchaffs, Willow Warblers and Blackcaps singing, a Coal Tit called nearby and two Mistle Thrushes flew over. So a very productive couple of evenings birding, and we still have the Terns to come hopefully.
Posted by James Emerson