A glance at social media late Thursday morning revealed some photos of the male Penduline Tit at Strumpshaw. This bird had first been heard two months ago, but since then there had been weeks without a sighting, and even then it was more often heard than seen. I had previous with Penduline Tits at Strumpshaw, having twice missed seeing them there in 2009. At the time I had no car, so both of those misses involved walking to the station, getting the train to Brundall and then walking to Strumpshaw. All of this meant that I was keen to try and see this bird, so after dropping Cathy off to get her hair cut I headed off to Strumpshaw.

Arriving at Strumpshaw the car park was full so I parked in the overflow car park opposite. The sun had emerged and as I crossed the railway line my first Brimstone butterfly of the year flew along the edge of the tracks. I nipped into the visitors centre to show my membership card before heading for the river. There was a great display of Coltsfoot growing along the edge of the path, but remembering from 2009 that Penduline Tits seem to show mainly in the morning, and aware that it was gone 1 o'clock, I tried my best to ignore the plants and insects to get to the sluice area.

When I arrived at the sluice I was a bit surprised to just see two photographers, both looking into a mass of branches sticking out over the river. I expected them to be looking at a Cetti's Warbler or something similar, until I heard a Penduline Tit call! Taking up a vantage point a little way back I stared through the branches and reed stems, and found myself looking at the Penduline Tit. I was a bit taken aback, having spent much of the walk wondering how long I would be prepared to wait before giving up and going home! Eventually the bird worked its way up into a willow, no more than 10 feet away from me and showed well before flying across to a sallow in the reedbed. It was mostly amongst the branches, but I did manage to get one photo with its head visible. 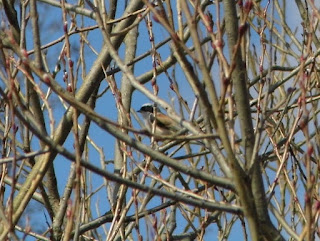 The Penduline Tit disappeared from sight, and wasn't seen again for the rest of the day, so my timing was impeccable. With a bit of a spring in my step I carried on to the tower hide, where I watched some Marsh Harrier displaying, and scanned the ducks. Rather than carry on to the Lackford run I retraced my steps, this time admiring the insects. There were lots of Eristalis hoverflies, along with a Peacock butterfly and a few queen bumblebees. Back towards the woods I watched several Clarke's Mining Bees (Andrena clarkella) bringing in sallow pollen to their holes in the sandy soil. Before leaving I spotted Ben in the car park with a working party and stopped to have a chat, seeing another Brimstone and a Comma flying about nearby. 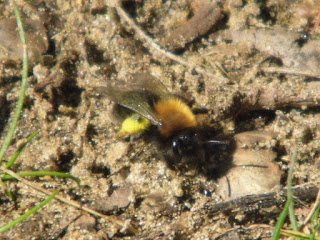