With bad weather forecast for the forseeable future, I headed to Thorpe Marsh after tea on Friday evening. It was a crisp, cold evening, which ensured that the marsh was quieter than usual, and I was able to scan the broad in peace. I saw a flurry of 'common' things - a Common Sandpiper flew low across the broad, and later I picked up a second bird working its way along the western edge. Turning round I saw two Common Buzzards soaring up over Whitlingham Woods, and from scrub near the river I heard my first Common Whitethroat of the year. 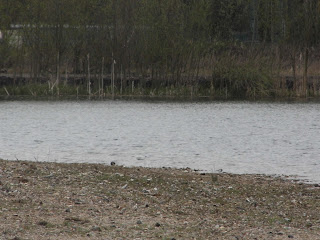 Common Sandpiper, about two thirds across, along the waterline

Despite the low temperatures I kept an eye out for insects as I walked along to the bird screen. Little was flying, but I stopped to look at a Spear Thistle covered in Copse Snails and noticed some small bugs. A closer look told me that they were Spear Thistle Lacebugs, a new species for me and another one for the patch list. I also saw a reddish coloured ant, but didn't identify it to species. 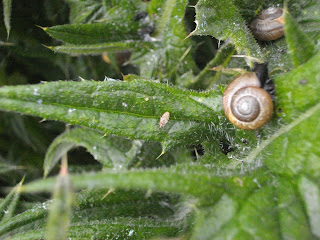 I had almost completed a circuit of the marsh and had yet to hear any Grasshopper Warblers. They don't always 'reel' if the weather is cool, so I checked with Ricky where he had last heard some. With his directions I located two. They hadn't been reeling earlier, so it was just a case of waiting a bit longer. One in particular was very vocal, although as is often the case they remained hidden in the vegetation. As I listened to the louder individual I was treated to a lovely orangey-pink sunset, a fitting close to another excellent local patch evening. 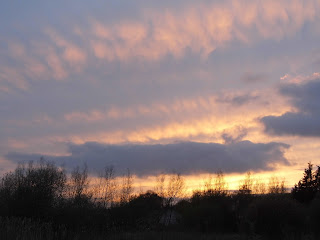