Having mentioned finding a Saucer Bug at Whitlingham a few weeks back, Dan Hoare (Norfolk's aquatic invertebrate recorder) had asked if I'd like to come to a meeting of the Freshwater Study Group. I thought it sounded interesting, so on Thursday evening I headed to Wheatfen. There were several other first-time attendees, and two samples to look through, one from a pond at Brundall and one from a dyke near Acle.

First impressions were that it was a bit overwhelming. When I was younger I did quite a bit of pond-dipping, so I was familiar with the basic IDs, e.g. 'caddisfly larva', but had never really tried keying out anything. I had brought my Aidgap key to cased Caddisfly larvae, but it soon became apparent that it was going to be harder than I'd thought. Geoff, who had brought the samples along, suggested that the caddis that I was looking at could only be identified by removing the larva from its case, so I left it to him!

Having developed an interest in woodlice I decided to switch my attention to some water slaters. I knew there were more than one species (three freshwater ones as it happens), so I picked up an old Freshwater Biological Association key and looked up the differences. It turns out they can be identified by head pattern, and I quickly identified all of ours as the common Asellus aquaticus. 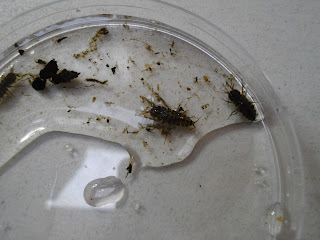 Turning next to snails, Dan helped us identify a Planorbis sp, Lymnaea palustris and Radix balthica. There was a bit of excitement as a Water Measurer was found and identified as Hydrometra stagnorum, whilst a Hydra (Hydra vulgaris) was very interesting to see. Many thanks to Dan and the group for allowing me to attend and for the help identifying the invertebrates. 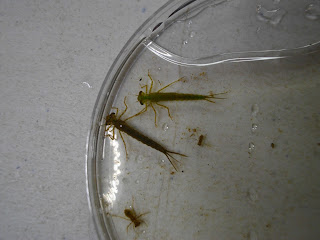 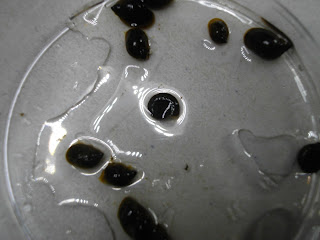 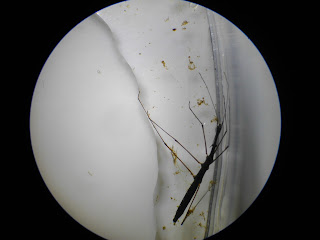