NORWICH: Distracted by a moth


I went to a couple of talks this week, firstly one by Carl Sayer, who discussed the conservation of the River Glaven for NNNS, and secondly Phil Parker talked about the Norfolk bats in churches project for the Norwich Bat Group. Whilst at the latter I noticed a moth on the wall behind the projector. It wasn't very long into the talk and I kept glancing at it, hoping it would stay until the end so that I could have a closer look. Having not seen many early spring species I suspected that whatever it was it would be a new species for me, and once the talk had ended I had a closer look. it turned out that the moth was a Shoulder Stripe, which was indeed a new one for me. An unexpected bonus! 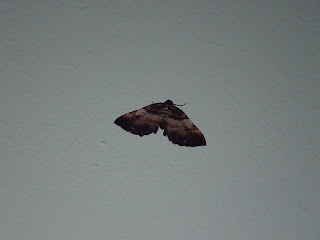