Eight people ignored the weather forecast and met at the Sparham Pools car park for the first NNNS field meeting of the year. Our focus was on lichens, and led by county recorder Peter Lambley we set off on a circuit of the reserve. Our first stop was an open area, where we looked for lichens growing on the ground. Mosses dominated, but two species of lichen were still hanging on, Cladonia rangiformis and a Peltgera sp. Some Fragrant Funnels were also growing in the area, although it wasn't until one dried off that the characteristic aniseed smell could be made out. 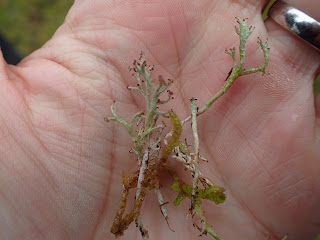 Retracing our steps we then walked around the perimeter of the lakes, paying particular attention to the communities of lichens that could be found on the mature Oaks. Peter showed us how testing the lichen surface with drops of potassium hydroxide (the K test) or bleach (the C test) can be used to separate otherwise similar species by looking for colour changes. The rain had set in, wetting notebook pages and steaming up hand lenses, but we carried on regardless and detoured to have a look at a row of mature poplars that held five new species for the day. 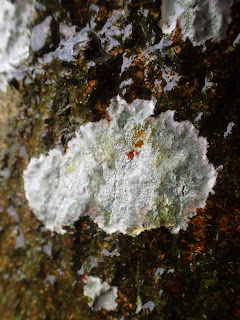 The red is a positive chemical test

Having finished our circuit of Sparham several participants decided to call it a day, but the remaining five of us went back to Peter’s house to eat our lunch in the dry, accompanied by a welcome cup of tea and scone. Before setting off for our afternoon destination we had a walk round the garden, the highlight of which was Usnea subfloridana growing on a bird table roof. 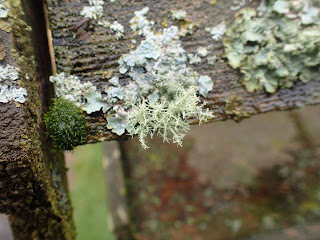 Whilst the morning session had been focused on lichens on trees, in the afternoon we moved on to Lyng church and graveyard. After examining several yellow lichens on the gravestones we moved on to the church itself, where the most interesting lichen was Bilimbia sabulatorum, a small brown lichen that grows on moss rather than directly on the stonework. 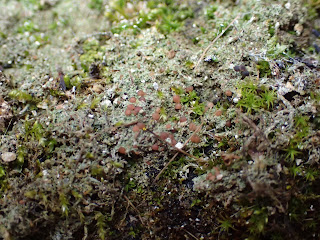 Typically as we finished up and prepared to leave the church, the sun came out after five hours of near constant rain. Despite this we saw between 45-50 species of lichens, about a third of which I'd not seen previously, so it was a productive day. Thanks to Peter for leading the walk and for his hospitality in allowing us back for lunch.
Posted by James Emerson