On Sunday afternoon Cathy & I visited Wayland Wood for the first time, hoping to see the first of this year's target species, Yellow Star-of-Bethlehem. I had heard that it could be tricky to find and the flowers only open on sunny days, but fortunately for me several people had seen them flowering earlier in the week and Dave Holman had kindly given me directions to them.

After arriving at the woods we set off, stopping to admire the violets by the edge of the path. I stopped again a bit further on to search for the Anemone cup fungus  had heard about yesterday amongst the Wood Anemone (no luck), whilst Cathy carried on ahead to locate the flowers we had come to see. A call from further along the path told me that she had found them, and fortunately the day had been sunny enough that the flowers were open. There were quite a few Yellow Star-of-Bethlehem plants on both sides of the path, so we got a good look at this rare plant. We did search the leaves for some even rarer fungi that grow on it, but they were disappointingly healthy! 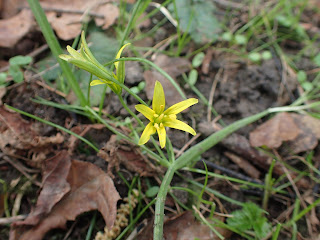 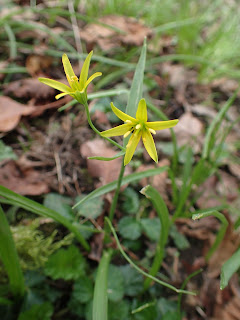 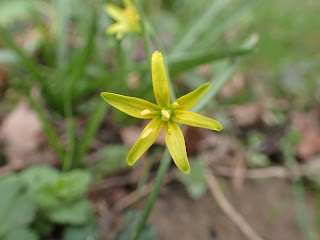 As we hadn't gone too far into the woods to see the Yellow Star-of-Bethlehem, we carried on a did a circuit of the woods. We were a bit early for many of the woodland flowers that will emerge shortly, but we did find a few invertebrates. Whilst I looked for Cramp Ball Weevils, Cathy found two White-legged Snake Millipedes, one stretched out and one curled up. Close by I found an empty moth cocoon and a Kidney-spot Ladybird. 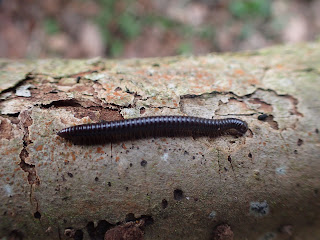 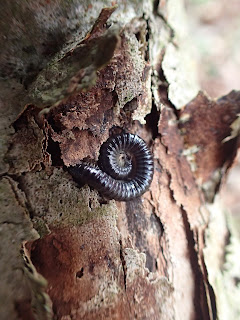