With rain forecast for Sunday, I went to Whitlingham on Saturday morning to get the March WeBS count done. Whilst scanning the Little Broad I noticed some movement in the reeds nearby and waited to see what would emerge. It transpired that the movement was caused by a rabbit, looking a bit bemused as it pushed its way through. Redwings called overhead, and Siskins were present in the trees between the path and the road.

Walking along the south shore of the broad the most interesting thing was the head and part of a spine of a Pike. There were some scales nearby, and I assume that the culprit was an Otter (this was close to the place where I watched an Otter earlier in the winter), but I was a bit surprised that the head had been left. 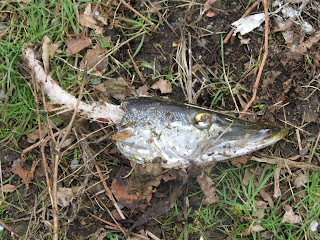 Further around the broad I heard my first Chiffchaff of the year singing, and later another two were heard. This date is only one off my earliest ever record, and on Monday I heard one at Lakenham Way (having been absent the previous week), so presumably there was an arrival over the weekend. Tufted Duck numbers were still in three figures, but other than that numbers had declined.

Selected combined Whitlingham & Thorpe counts were:
Of the rest of the sightings, Coltsfoot, Lesser Celandine, Dog Violet and Dog's Mercury were all in flower, and a Brambling called from the large trees near the second car park. A Reed Bunting also showed well between the two broads. 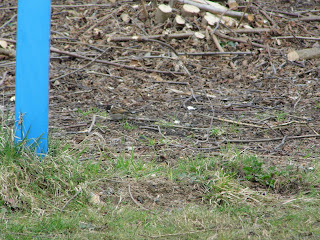