Saturday saw the penultimate fungus study group foray of the year, held at my old local woods, Bacton (Witton) Woods. Before heading off I popped round to see Jeremy and Vanna, who had a shieldbug for me. The commonest Shieldbug that I'd yet to see was Juniper Shieldbug, a species which has increased its range in recent years. They seem to be hard to find just by checking conifers, but Jeremy has discovered several that have emerged from hedge clippings, and he had kindly kept hold of one for me. They are nicely patterened things, and noticeably smaller than the closely related Hawthorn and Birch Shieldbugs. 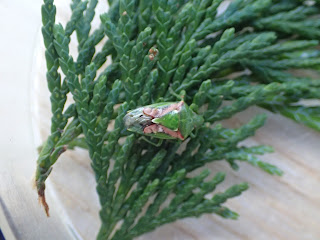 After saying goodbye I headed back to North Walsham and on to Bacton Woods, my breath visible within the car as a reminder of the low temperatures. As we headed off into the woods Stewart pointed out some Wood Sanicle leaves that held mines of Phytomyza brunnipes. We started adding species to the days list, mostly common things like Clouded Funnel, Tanwy Funnel, Jelly Ear and Candlesnuff. After a while we were still within sight of the cars - not great for covering a large site but a good indicator that there is lots of fungi about. 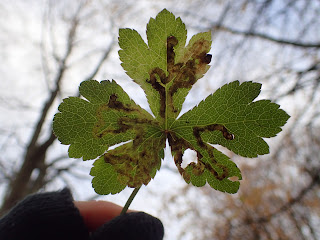 Crossing the main path we continued to acrue records, but some of them were a bit more unsual. Neil found some pale yellow strongly decurrent toadstool types that were determined as a pale yellow variant of Trumpet Chanterelle (Cantharellus tubaeformis). Bearded Dapperling (Cystolepiota seminuda) was another good find. Other highlights included Boletus ferrugineus, Conifer Shield, Violet Domecap and a tiny pink bonnet, Mycena smithiana. 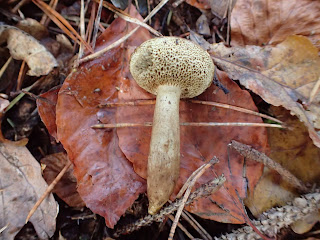 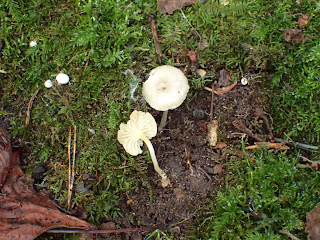 We stopped for lunch at the pond, before heading up through a coniferous area and into some Beech woodland. Whilst scanning the leaves I noticed a tortrix moth, Acleris sparsana, along with some common beech leaf mines. David found some egg cases of the spider Paidiscura pallens, on the underside of a leaf. In total the list pushed towards 100, albeit probably 20 of those were plant fungi (mildews and rusts) found by Stewart. 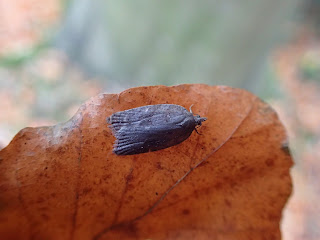 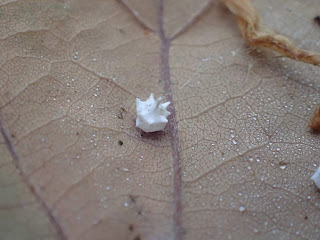