I am aware that some of my interests are somewhat niche, even within wildlife circles, but it isn't just me. I was reminded of this before a fungus study group meeting in mid-August. We were going to Burgh Common, an out of the way site managed by the NWT, so had met in a car park nearby. Stewart Wright had arrived early to check out a local churchyard, where he had looked for fallen Monkey Puzzle scales (I don't think they are classed as leaves on this species) and had found some with a micro fungus growing on. The species, Phomopsis araucariae, was new for Norfolk and one of only a handful of UK records. I presume that like the species I found on Ginkgo last year this will turn out to be present on most Monkey Puzzle Trees. 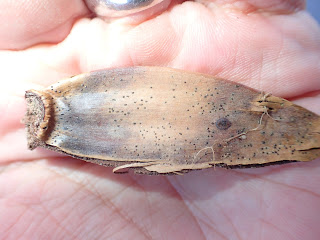