In recent years the Purple Emperor butterfly has been spreading away from core populations in the East Midlands, with new records (or new modern records) at sites in Northamptonshire, Cambridgeshire, Suffolk, and more recently Norfolk. Whilst there had been occasional sightings in the past, records of both male and female Purple Emperors at Sheringham Park, combined with sightings nearby at Beeston Common in the past three years had suggested that they were present in low numbers and probably breeding nearby.

With this background, I was rather surprised when Butterfly Conservation released a press release to announce the official return of the Purple Emperor. Partly it seemed odd wording (either its back or it isn't, the official part seems redundant, rather like most uses of the word literally), but also this was before any sightings had been reported from Norfolk in 2019, so why now? All became clearer about a week later. Photos of Purple Emperors started to be shown on social media - clearly they were now present somewhere else, but there was a seemingly unecessary secrecy about it. This didn't last long - the location was Foxley Wood, the location of the last Norfolk population that died out in the early 1970s. The reason for initially keeping it quiet wasn't revealed. Foxley is a great place and thanks to sympathetic woodland management seems in a good place for the population to rebuild. The NWT wrote about the return here: https://www.norfolkwildlifetrust.org.uk/news-and-articles/news/all-news/2019-07-17-the-emperor-returns

Patrick Barkham also wrote about the Foxley Purple Emperors for the Guardian. One of the interesting bits here is the local who remembers last seeing them in 1971 - pertinent only because one prominent Purple Emperor finder was keen on the theory that they had been present but unreported in woods across East Anglia for the past 50 years, a theory rejected by almost all local naturalists (partly because there was no real evidence for it and partly because it was a bit insulting to suggest that nobody else was seeing them despite these woods being well watched and visited sites) https://www.theguardian.com/environment/2019/jul/30/butterflywatch-the-return-of-the-dazzling-purple-emperor

Anyway, with a few hours free one morning we went on a family visit to Foxley, hoping to see a Purple Emperor. It was during a hot period so not ideal whether for either us or the butterflies, but not long after arriving we did see a Purple Emperor as it flew majestically out of a large Oak, across the ride we were on and off towards an area of sallows. We also saw several Purple Hairstreaks and at least five Silver-washed Fritillaries.

The Hogweed was covered in insects - sadly I can't identifiy many of the flies, but there was also some common hoverfly species too plus Chrysotoxum bisinctum. Elsewhere in the wood I found a leafmine of the sawfly Heterarthrus wuestneii on Field Maple, which might be a new record for the site, and got excited by a large greyish Longhorn Beetle. I assumed it was something I'd never seen before, so was surprised when my database showed a previous record. That was from Tasburgh the previous month and the explanation was simple, this was a Variable Longhorn beetle, and the one I'd found looked nothing like the yellowy-brown seen the previous month. 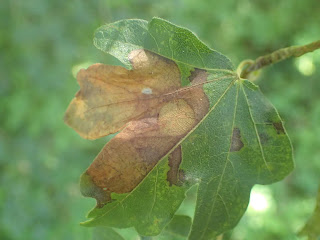 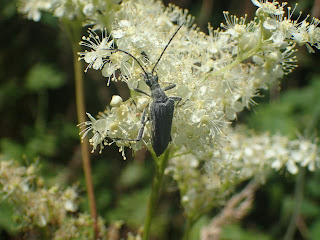