Readers with some knowledge of fungi will probably be familiar with the genus Lactarius, the Milkcaps, which exude a milk-like latex when the cap or gills are damaged. There are however a handful of Lactarius species that give out a bright orange latex instead of white. On my way to work I spotted one of these species, looking rather plain and unobtrusive below a Pine tree. This was a good clue that it might be Saffron Milkcap, Lactarius deliciosus, (the slightly commoner False Saffron Milkcap is usually under Spruce), but I took one to go through the series of checks needed to confirm it. Below are some photos outlining the things seen: 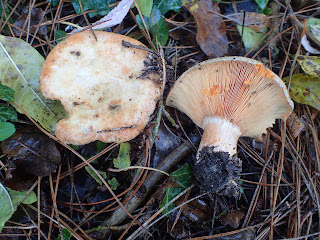 The left hand fungus is in situ, showing how unspectacular it looks (they can look brighter than this). The right hand one shows the gills being broken and giving off orange 'milk' 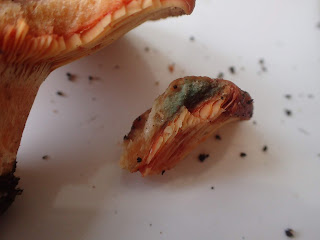 This sections shows that the fungus bruises slowly green when broken 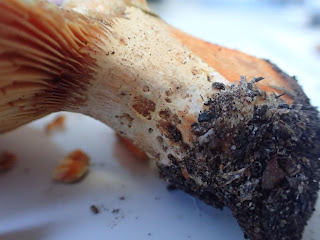 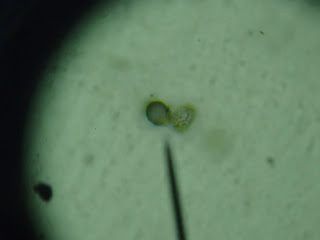 Size and shape of spores is often important, but with things like Russulas and Lactarius you often need to look even closer (this is at 1000x using an oil immersion lens). Using some close focusing you can see a network of ridges on the spore on the right. They were also present on the one on the left, but because of the depth of field you could only focus on one at a time. 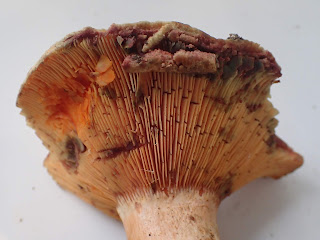 Two final points, firstly here you can see the gill attachment to the stem is slightly decurrent (the gills do go onto the stem but not in a flowing arc like they would in a funnel for example. Secondly, the edge that is broken up and had given off orange latex earlier has now turned a wine red over time.

These things, combined with spore size, it being under pine and a drop of the latex tasting mild but turning slightly bitter, confirmed the ID.
Posted by James Emerson