On Sunday I helped lead the second of the two fungi walks at Strumpshaw Fen. There had been some strong winds recently that meant a blanket of leaves covered much of the ground in places, but we still managed to find a good range of species, including a handful not seen on the earlier walk. The first of these 'new' species was Death Cap (Amanita phalloides), one of the most poisonous species in Britain, with a large group found under some Beech trees. 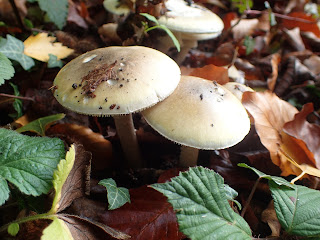 We then moved on to the log circle, which had fewer species than in October, and next into the clearing where we saw a very nice 'swarm' of small white discomycetes. 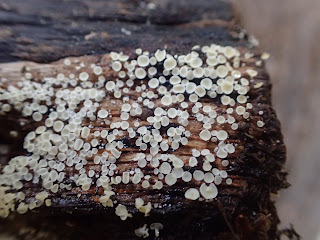 Having spent quite a bit of time relatively close to reception we set off for the woods and I noticed an interesting looking clump of Mycena by the path. Suspecting that they might be one of the ones that produce latex when broken, I snapped a stem. It gave off a dark red, blood-like latex, which combined with the deciduous wood made it Burgundrydrop Bonnet (Mycena haematopus). Further along we saw Crimped Gill (Plicatura crispa), a species with fake 'gills' made out of folds in the underside of the cap, and finally a couple of Blushers (Amanita rubescens) amongst a group of Spotted Toughshank (Rhodocollybia maculata). 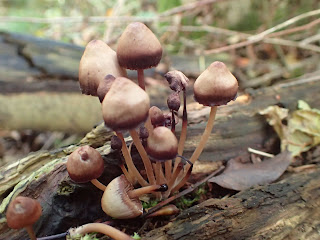 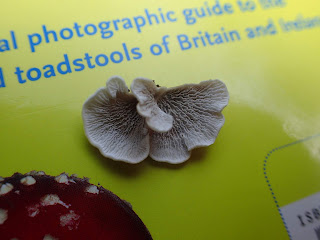 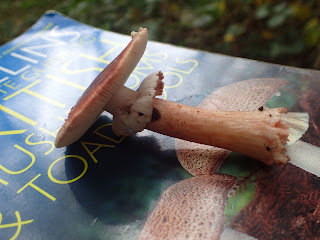