Having taken Cathy to work I returned home to look after Rose. During a spell outside we had a look around the garden. As the full lockdown wasn't declared until the evening I didn't make any attempt to record the handful of wild plants growing in the garden, but I clearly noted Petty Spurge because I recorded the rust fungus Melampsora euphorbiae growing on it. Rose was happy to walk around for ages holding a 7-spot Ladybird, but I was more interested in a Juniper Shieldbug, a new species for the garden. 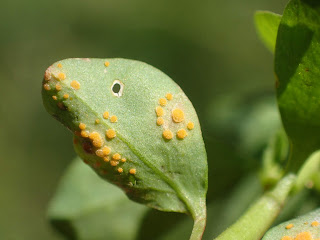 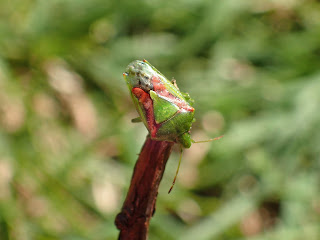 Whilst getting ready for bed we heard a Tawny Owl calling distantly. Whilst probably resident at Catton Park about a ten minute walk away, we tend to only hear owls once or twice a year from the house. I could well imagine in an older, more superstitious time this could have been thought of as an omen, although whether a reassuring sound or a 'tumbleweed-type' sign of things to come would presumably depend on the listeners predispositions.

An exciting day with one addition, three Magpies visiting the feeders.