43. Hedgehog - poo found in the garden!
44. Red Dead-nettle (present all along but missed off the list earlier)
45. Firethorn Leafminer (Phyllonorycter leucographella) - papery mines on the leaves of the Pyrocantha out the front, seen when going out to go food shopping.

A leaf mine was evident in some basal Ox-eye daisy leaves. There is a fly species that I've seen that is known for doing this, Phytomyza leucanthemi, but it is quite difficult to separate the mines from Chromatomyia atricornis agg, the species mentioned earlier that is covering my Dandelion and Sow Thistle leaves. Barry Warrington, the Agromyzid Recording Scheme organiser suggested trying to wait until it pupates, at which point they can be separated. 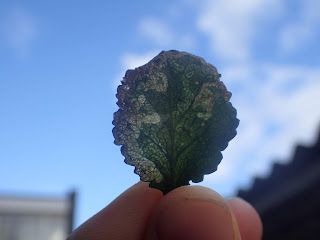 Whilst looking for insects I did notice a couple of species-specific mildews. One on the stems of Petty Spurge was Podosphaera euphorbiae, whilst the one on Creeping Buttercup was Erysiphe aquilegiae var ranunculi. 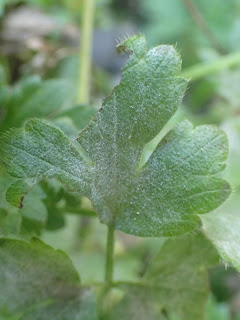 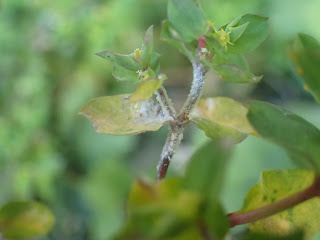 Something that I looked for having seen it mentioned on Twitter was a 'leaf miner' that eats out cypress twigs. You can find them because it turns them a whitish colour and if you look carefully you can see holes where the frass (caterpillar poo) is ejected. A couple of species do something similar, but this one was caused by the Cypress-tip Moth (Argyresthia cupressella). I was pleased to have seen something new for the garden, then realised that actually I had seen the adult moth here already. 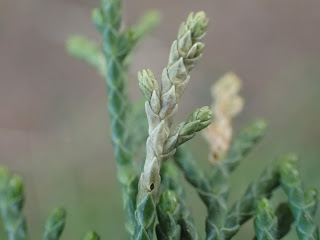 An otherwise typical garden wildlife day was brightened up by the visit of a Wren, which explored the garden and appeared to be finding some insects around the Honeysuckle along the back wall. A scarce garden visitor.

Exciting developments today, with a Blue Tit carrying some small twigs into the nesting box on our shed. The box was up before we moved in, and both Blue Tits and Great Tits visit it annually before deciding not to nest there. This time, however, we are hopeful that Blue Tits might actually nest there! The only difference to previous years is an interesting one. We grew a Teasel in a wildflower patch nearby, and we left the big dried structure in situ - this has given the Blue Tits an intermediate perch close to the nest box to fly to before then flying in. Could this have made the difference?

One more micro-fungus seen today, a rather non-descript species on daisy leaves. Some tiny ground bugs were also noted, luckily I had inspected these in the past so knew they were the rather tricky Nysius huttoni. 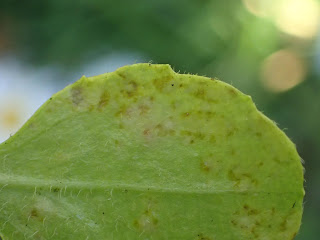 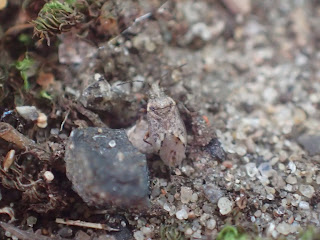