It was after dark when I noticed online several other Norwich (and indeed further afield) birders commenting on the number of Wigeon flying over their houses. I've not had much luck with hearing notcurnal birds, admittedly mostly due to lack of effort, but noise pollution and not living on an obvious flyway also playing their part. I had already decided to put the moth trap out, and whilst out heard what sounded like wingbeats of something flying overheard. I tried again an hour later and bingo, the very clear sound of some Wigeon calling to each other fairly low and flying eastwards. A very satisfying moment to hear a bird I associate with the coastal and broadland marshes from my urban garden.

Incidentally you might hear the phrase 'noc-mig(ging)', which can mean listening to birds flying over but more usually is the recording of bird calls over the house during the night then analysing the recordings to find out what flew over. This undoubtedly adds to our knowledge about bird movements, but is also like an annoying friend constantly telling you what you missed out on seeing. In addition I think that analysing the recordings each day would be a bit of a time sink, so its not something I'll be doing for a while yet. Nice to pop out now and again to listen to birds flying over though, something I already did in the autumn when the Redwings return.

Rose and I checked the moth trap in the morning, and were very pleased to see that we had caught two moths - rubbish in comparison to most moth trappers, but before May it is very hit and miss if I catch anything. The two moths were a Common Quaker and a Common Plume. 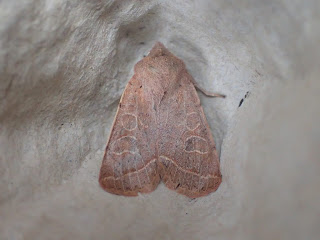 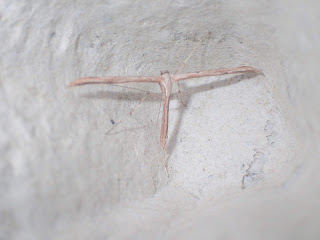 After last nights successful nocturnal listening I tried to repeat the trick, particularly as some people in the west were also hearing Common Scoter. No luck with the Scoter, which typically reach Norfolk later in the night (i.e. after midnight) and in lower numbers that places further north. Incidentally an excellent article with maps visualising their progress over a few nights is on the Birdguides website and available to non-subscribers, see it here: https://www.birdguides.com/articles/migration/citizen-science-reveals-nocturnal-scoter-migration-routes/

I did however hear a flock of Teal, not as close as the previous nights Wigeon, but another new one for the garden list.

An early trip outside with Rose to fill up the bird feeders and I was rewarded with the sound of a Chiffchaff calling from trees off towards the local recreation ground. One year we had one fly-catching in our garden, but the rest of time we make due with hearing snatches of distant song. A Dunnock was also heard - in previous years one has held territory in our conifer, singing almost level with our bedroom, but this year he must be based elsewhere.