We decided to go on a walk at St Faith's Common, just north of Norwich. I was hoping we might come across Yellow Bird's-nest, a long term plant target of mine, but walking along one of the main paths the area of promising looking woodland had loads of the trees painted with "private" or "keep out" on. I don't recall that bit being off limits before, I can only assume that this section of the woodland is privately owned and they can't afford a fence, but it looked horrible and quite frankly isn't the sort of thing you want to see daubed about in the woods. Part of this area has been bought by the council to make it a country park, so perhaps that has been the spur to assert ownership over this bit. Despite the frustration we obeyed the signs and after a while decided to head back and instead walk along the open ride along the edge of Houghen Plantation. The only sighting of interest was a new tortrix for me, Epagoge grotiana. 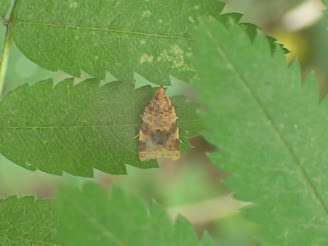 This latter open area was much better for insects. Cathy had a large insect land on her back, and wondered if it was a damselfly - fortunately it landed nearby and I could confirm it was actually a Sabre Wasp, Britain's largest ichneumon wasp. A couple of Crossbills flew over (this is a good area for them and has also attracted Parrot Crossbills in the past) and other interesting insects included the bugs Alydus calcaratus and Rhombic Leatherbug. 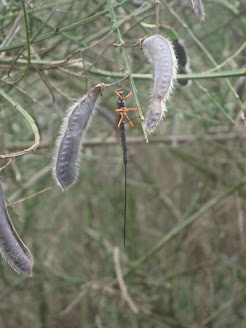 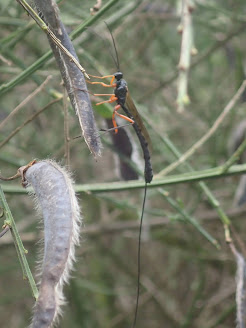 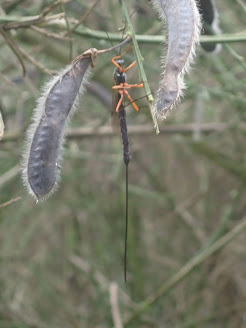 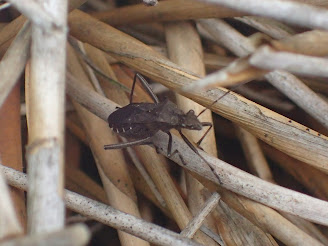 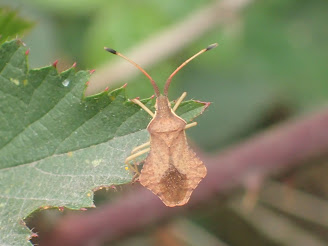 Email ThisBlogThis!Share to TwitterShare to FacebookShare to Pinterest
Labels: Ichneumon