The first Sunday of May saw Gary, Adam & I head out for our annual Norfolk bird race. The following is an account of our day out, minus a couple of potential rare breeders (Bittern and Dartford Warbler), which we heard and saw respectively, at some point during the day. We all ended up with the same total this year, although at different points various people were up or down on the others, so their numbering may vary from mine.

As we left Norwich we saw a Fox running down the road. That was out only sighting of interest until we reached the Brecks, when a Tawny Owl that flew across the road became bird number one of the day. Last year when we reached Santon Downham the temperature was minus one, but this year we were greeted with drizzle and relatively warm temperatures. We walked downriver, hearing a range of common woodland birds. Treecreeper, Cuckoo and Garden Warbler were all reasonable additions to the list, and we also saw an Otter in the river. At the edge of the plantation we heard Kingfisher, saw Marsh Tit and heard a drumming Great-spotted Woodpecker. Green Woodpecker and Siskin were added on the way back, along with Grey Wagtails at the bridge.

Having recorded 42 species we headed across the road to St Helen's picnic site, where another three species were added, Mistle Thrush, Swallow and Pied Wagtail. From here we moved on to a nearby block of forest to look for Woodlarks. It turned out that there was a nice path, but instead we took a log strewn one that seemed to have been enlarged by a forester driving a monster truck. Nonetheless we emerged at a clearing where we were able to add Skylark, Woodlark and Tree Pipit, plus Yellowhammer nearby.

Next stop was Lynford Arboretum. We connected with our target of Firecrest, then headed down to the lake to see Little Grebe, Tufted Duck etc. On our way back we saw Nuthatch, having failed to see any at Santon. Across the road at Lynford Water there were loads of hirundines, Great-crested Grebe, Cetti's Warbler and Gadwall. We drove to Weeting (ticking Collared Dove, House Sparrow and Rook in the village) where a Stone Curlew showed well from the right-hand hide, along with Lapwing and Linnet.

My 70th species of the day came at around 10:00 at Welney when a Shoveler flew over as we got out of the car. We added several species from Lady Fen, including Black-tailed Godwit, Yellow Wagtail and Little Egret. From the main hide we saw Avocets, Whooper Swans, Redshank, Wigeon, Snipe, Little-ringed Plover and Common Tern. Walking down to the Lyle Hide we managed to pick out a drake Garganey, and a Swift flew over. Back at the car park we managed heard a Tree Sparrow as it flew over, and also connected with Corn Bunting.

Heading north I saw my first Red-legged Partridges and Buzzard of the trip. Four Arctic Terns looked out of place flying across a field, but soon reorientated themselves to one of the cut-off channels. We attempted to find the recently reported Black-necked Grebe at Tottenhill without success. We also had a look at Pentney gravel pits adding nothing (although we did see another Little Ringed Plover).

The next stop was Roydon Common. Having already seen Woodlark we just had a quick walk along the main path, seeing our target bird (Stonechat) along with bonus Curlew (my 100th bird of the day) and Wheatear. On our way back to the car Adam stopped and motioned to a Slow-worm on the path. We stood still and waited until Gary caught us up. It staid still on the path until we moved, when it turned unhurriedly and slithered off. 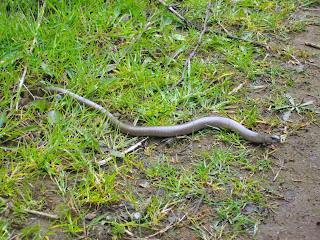 At Flitcham Abbey Farm the Little Owl was sat in his tree, and we also saw Grey Partridge. Lesser Whitethroats and Bullfinches were singing - I managed to see one of the former, but had to be content with just hearing the latter. In the nettles nearby was a Red-breasted Carrion Beetle and a 22-spot Ladybird, and on the brow of the hill Adam & I saw a couple of Fallow Deer. 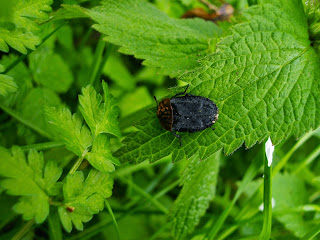 We took a diversion from our normal route to visit Snettisham Coastal Park, hoping for Ring Ouzels and other possible bonus migrants. We didn't find any, it being a vast area to cover quickly. The tide was coming in, which did allow us to pick up  Grey Plover, Golden Plover, Ringed Plover, Bar-tailed Godwit and Knot. From here we drove to Titchwell via Choseley, where we caught up with the passage Dotterel, also seeing more Wheatears and Corn Bunting.

We arrived at Titchwell much later than usual, meaning no cup of tea for me. I had 114 birds upon arrival, so it was make-or-break time for our list. Luckily there was a lot to see. Bearded Tits flew across one of the dykes, Brent Geese and Pintail were on the freshmarsh, as was a Common Sandpiper, Turnstone and Little Tern. Some Pink-footed Geese were flying in the distance, and a Greenshank was on the tidal marsh. On the shore we saw Sanderling and two Little Stints in with a flock of Dunlin. Common Scoter passed by, as did a Sandwich Tern. A Short-eared Owl flying east initially looked Harrier-like, but evenutally revealed its true identity. A flyby Green Sandpiper and a couple of Eider meant we were on 130 as we walked back onto the reserve, three short of last year.

A Spotted Redshank, Pochard and Barn Owl took us level before we headed onto the east trail. Here we easily picked out Red-crested Pochard, and heard a Grasshopper Warbler. We moved further round on the off chance we could see it, and luckily for us a friendly birder already had it in his 'scope. It was all the more impressive as he confessed to us that he couldn't actually hear it reeling!

Heading east along the coast we picked up Spoonbill, Red Kite and Sparrowhawk, but didn't find any Turtle Doves on the heathland inland from the coast. We headed back to Cley as sunset approached, and arrived just in time to see a small flock of Yellow Wagtails including a Grey-headed Wagtail fly off to roost. After a brief chat with David Norgate we headed to the central hides, hoping to add Ruff or Whimbrel to our tally. We failed to see anything new, so headed inland where we spent a while standing in the moonlight, listening to a Nightingale and watching a bat slying around the scrub. In the distance we saw flashes of lightening, an atmospheric end to our day, and my best ever day total of 140 species.
Posted by James Emerson