Monday was a particularly warm day, and after work I headed down to Thorpe Marsh for a look round. As I arrived some Swifts screeched overhead. In the past few days Swifts have arrived in force over Norwich, I'm now seeing them daily at home and at work. I met Jeremy Halls who works near Thorpe Marsh, and we started a circuit with a look over the broad from the shingle. There was very little of note on the broad, but then a male Marsh Harrier glided into view, looking resplendent in the sunlight. We watched it hunt back-and-forth before flying over the broad and away eastwards.

Further round we began to see damselflies, at least one Large Red and several teneral damselflies, probably Common Blue Damselflies. Butterflies like Peacock and Orange-tip were also flying around. Earlier in the month Jeremy had found a Stickleback nest in one of the dykes, but the vegetation had grown up and we could find it on this occasion. I took the opportunity to learn a bit more about some of marshland vegetation and as a result added a few more species to my all-taxa patch list, including Lesser Pond Sedge, Hard Rush and Spring Sedge.

A new invertebrate for my patch list was the European Cinchbug, which was numerous in one area of dykeside vegetation. I had only seen this species once previously - the day before in my back garden! 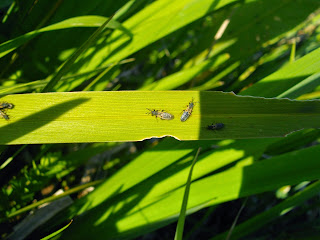 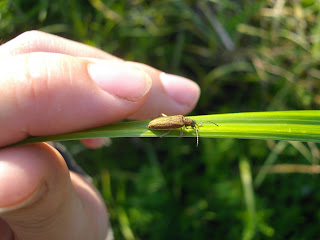