On the way back from Ashwellthorpe I got a phone call from Ricky, asking if I wanted to go and see the Citril Finch at Burnham Overy. I had been aware of it in the morning, but because I'd been out I hadn't realised that it had settled down and shown well during the afternoon. Cathy kindly gave her assent, so after a quick bite to eat Ricky picked me and Andrew up and we set off for Holkham.

Parking up at Lady Anne's Drive we noted a couple of Brent Geese flying past, along with some noisy Oystercatchers and lots of Woodpigeons. We took a brisk walk along the pines until we emerged at a dell at the edge of the dunes. A small crowd (given the rarity f the bird) of around 30-40 people were watching the Citril Finch as it fed and hopped around part way up a dune. At times it showed well on the bare sand, although it also spent quite a bit of time obscurred behind a bramble. 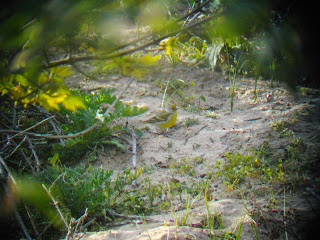 After watching the Citril Finch for a while we set off back to the car, stopping every so often to scan the freshmarsh in the evening sunshine. On our way back we saw three Barn Owls. The first was flying over the marshes, but the second two were both perched up in trees near the road. The first was a typically pale individual (see photo) but the second bird, which unfortunately flew off as we neared it was buffer on the underparts. Many thanks to Ricky for the lift. 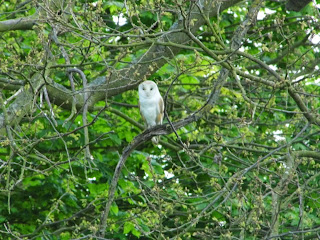