WHITLINGHAM: May count & a red fly

With a busy weekend planned, I went down to Whitlingham on Friday evening to complete the May wildfowl count. The Great Broad resonated with the sound of Common Terns. Four were present, three resting on buoys and another one flying around. They called frequently too each other but as they were neither agressive nor actively feeding I wasn't sure why! On the wooden platform just west of the bird screen I picked out a Common Sandpiper bobbing up and down. Canada Geese seem to have done well this year, with five broods so far (four on the Great Broad and one at Thorpe), and another bird on a nest on the main island. Swifts, a male Gadwall and 20 Tufted Ducks were also of note. 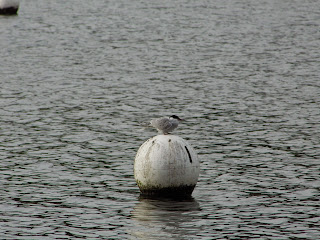 It was a nice evening, so as I was going round I kept an eye out for invertebrates, adding several species to my patch list. I tracked a moth that flew past as it landed in some nettles and found it was a Green Carpet. A smaller but equally welcome moth flying around the gorse was a Grey Gorse Piercer. An unusual-looking metallic red fly had me stumped, but it turns out it is a green species (Gymnocheta viridis) that sometimes turns red with age. A final new species was an overdue fungus. I have begun work on a downloadable guide to Whitlingham's bracket fungi, and had been unable to find any records of Sulphur Polypore in my notes, so it was apt that I noticed it growing on a tree on the main island whilst 'scoping the gulls. 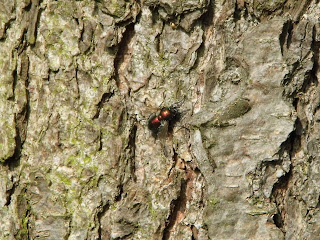