On Saturday I decided to head to Thorpe Marsh rather than Whitlingham. I timed my visit for late afternoon so that I would still be present at dusk and able to check for owls. As the footbridge is still closed for another two months I headed down Bungalow Lane, dodging the large puddles. 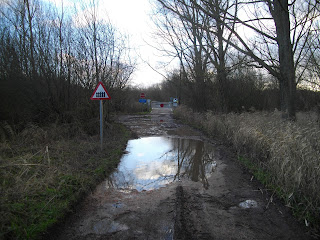 The path running east to west across the marsh was closed due to flooding, so I headed to the main path along the wooded northern edge of the marsh. There were a couple of particularly muddy bits, but it wasn't as bad as I had been expecting. Scanning from the bird screen I saw a group of 41 Pochard, with another fifteen or so spread out across the rest of the broad. A few large gulls were dropping in, but all were Herring Gulls. Walking further around the broad I heard a Water Rail calling from Whitlingham. This set off one close by the path at Thorpe, although it steadfastedly kept out of sight. I walked towards the footbridge to have a look at the swanky new interpretation board. 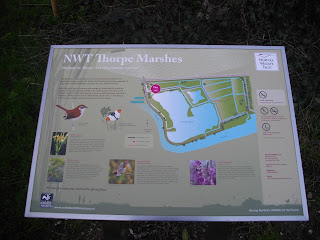 Walking past the cattle pound I heard a Meadow Pipit flying overhead and saw an overwintering Chiffchaff in some bramble scrub. Further patch ticks were three Linnets and a Grey Wagtail, both also flying westwards, and a Coal Tit calling from the wooded area as I worked my way back to the end of Bungalow Lane. I found myself a good viewpoint over the marsh and waited until it got dark, hoping to see a Barn Owl, but had no luck. I did get good views of two Chinese Water Deer feeding out on the marsh before calling it a day and carefully making my way back along the lane. 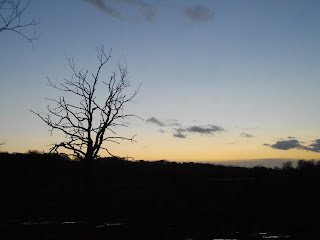