The first of Sunday of May usually sees Gary, Adam & I embark on our annual Norfolk bird race. This year we were accompanied by Gary's friend Alysia, who having recently got into birding was keen to see some new locations and birds. For any readers unfamiliar with the concept of a bird race, it is an attempt to see or hear as many species of birds as possible within a fixed time period, usually a day. Imagine a sort of amalgamation of Springwatch, a round Britain rally and 24, with lots of product placement from crisp manufacturers and lucozade.

Incidentally the previous day had seen five teams compete in the Norfolk Bird Race organised in association with the Norfolk Bird Fair, which is being held on 21/22 May. The teams were sponsored to raise money for Wader Quest, and raced across East Anglia rather than just Norfolk. If you are reading this on Monday 2nd May you could still donate to Wader Quest here: https://crowdfunding.justgiving.com/Norfolk-Bird-Race-2016. If not, then why not visit the Norfolk Bird Fair and hear about it there?

Gary picked me up at four o'clock, and we headed down to our usual starting point on the Norfolk/Suffolk border. On our way we picked up our first bird of the day, a Tawny Owl, close by in an area of Breckland forest. Incidentally Adam had seen a couple of birds already, and during the day some of us sometimes missed a bird and picked it up later, so my sequence of birds will be slightly different from Gary's for example. We also didn't record some of the common 'heard only' birds, knowing we would see them later in the day. What follows is a rough account, including some but not all of the birds we saw.

The next birds on the list were things like Pheasant, Carrion Crow and Magpie, before we stopped to look for Treecreepers. We could hear several, but it took a few minutes before I eventually picked one up on a nearby tree. A couple of Mandarin flew past, the first of three pairs we saw in the area. A Water Rail called and went down on the list as we thought it possible we'd not see one later (and we didn't). Nuthatch and Great-spotted Woodpecker were added to the list, but most pleasingly of all we got excellent views of two Lesser-spotted Woodpeckers. 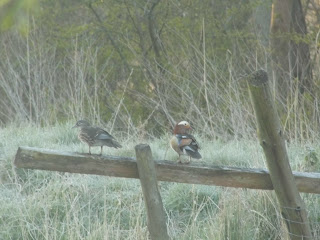 Heading back along the riverbank we saw Marsh Tits, Green Woodpecker, a Sparrowhawk, two flyover Lesser Redpolls and a singing Garden Warbler. Heard but not seen were Sedge Warbler, Reed Warbler and Willow Warbler. A Kingfisher flew downriver, and a Siskin flew over us. The lack of floating leaves in the river meant that we were concerned we might miss out on Grey Wagtail, but handily one flew past us shortly after. Goldcrest, Jay and Coal Tit were handy early additions, so we moved on having seen 42 species with another 7 heard. A look around St Helen's picnic area added Goldfinch, Greenfinch, Linnet and some rather picturesque Mute Swans. 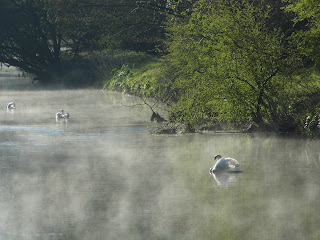 Next stop was some forest rides nearby, where we successfully saw some Tree Pipits. Skylarks had begun to sing, and we saw a Willow Warbler having heard them earlier in the day. A Stonechat was a nice surprise and meant that we could cut out a stop for them later in the day. Our next stop was Lynford, and we headed towards the lakes first. A smart male Bullfinch was visible from the car park, and a Cuckoo and a Common Sandpiper were present around the main lake. In some open land nearby see found some Woodlarks and a Wheatear.

Heading back into the arboretum we heard a Firecrest singing and located it close by. Heading down to the lake we saw a Little Grebe, before heading to the paddocks. A Grasshopper Warbler reeled from a small tree close by, before being chased out by a bird that looked like it could have been a Lesser Whitethroat, but vanished before we could confirm it. Heading back through the arboretum we got a proper bonus bird, as a calling Hawfinch flew over us and away into the trees.

Our next stop was Weeting Heath, but on our way we stopped in Weeting village to add House Sparrow, Collared Dove, Rook and Swift. We were to see lots of Swifts throughout the day at a range of sites. Despite quite a few cars in the car park there was nobody in either hide at Weeting, and we couldn't blame them as there was no sign of Stone Curlews from either of them. This was our first 'miss' of the day, but we were still doing well and didn't have time to hang around so we headed off towards Welney, adding Swallows, House Martins and Red-legged Partridges.

As we neared Welney I noticed a Yellow Wagtail in a field. By the time we stopped and reversed it had gone, but in a field the other side of the road there were several more and also some White Wagtails. Further round Gary spotted a Little Owl on a building roof. He wasn't sure at first, asking if it was a bird or just a knob on the roof, so it wasn't surprising that it flew off before he could photograph it. 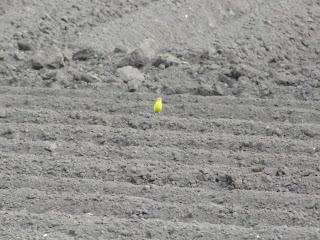 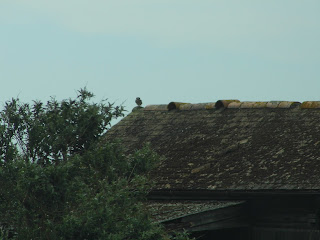 At Welney we added a few birds from Lady Fen (Shelduck and Avcocet), before heading to the main observatory hide. Here a Little Ringed Plover and two Garganey were the highlights, along with a few Whooper Swans, Common Terns and other common ducks. A Cetti's Warbler sung and we added Lesser Whitethroat, Wigeon and Reed Warbler along the path. A bit further up we stopped at one of the wicker hides. Dunlin and Ringed Plovers were on a scrape, and a Great White Egret was feeding along the back of the pool. A Meadow Pipit became my 100th bird of the day at 11:45, the first time I've got to the 100-mark before 12. After hearing loads I finally saw a Sedge Warbler in the car park before we left. 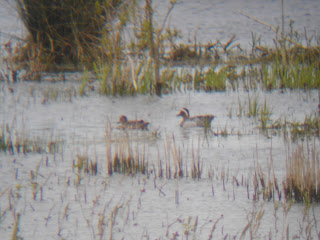 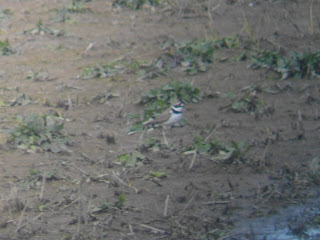 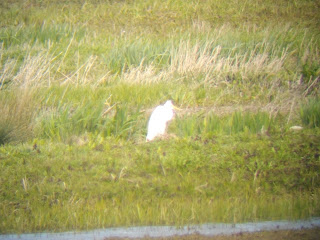 Herring Gull and Feral Pigeon were additions as we travelled up through Norfolk to Tottenhill, where fortunately there weren't many leaves on the trees allowing us to see a Black-necked Grebe on one of the pits when it swam out into open water. We arrived at Flitcham, where a Red Kite was flying over a roadside field. Our first Egyptian Geese of the day were in a field on the otherside of the road. We had a brief look from the hide, where an adult Yellow-legged Gull was perched up close by. We walked into the village and saw some Tree Sparrows. 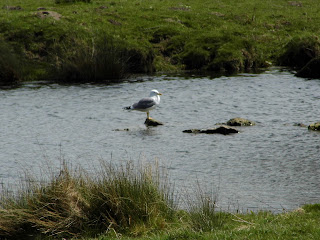 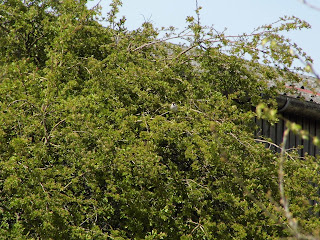 Our next stop was Snettisham CP. Last year we had tried here and not seen much, but we thought it was still worth a go. It didn't look promising with lots of people and dogs running around, but further away from the car park Gary heard a Ring Ouzel calling and I spotted a Redstart perched up on a Hawthorn. With not much other than a distant Marsh Harrier, we headed up to the top path to look for waders. The tide was in, and there weren't any. Darn. Walking back I spotted a Whinchat perched up nicely, steadfastly ignoring the hubub going on along the beach. We then cut back through an area of scrub, and Gary was vindicated as a Ring Ouzel flew out of the area he had heard it in originally. 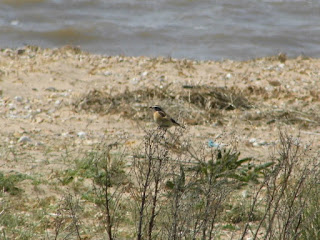 A quick stop in Hunstanton added Fulmar to the list, before we went to Thornham Harbour. There were less waders than we'd hoped for, but Curlew, Brent Goose, Whimbrel and Grey Partridge were all added to the list. There was even time for me to photograph the hoverfly Rhingia campestris along the coast path. Heading inland we stopped to twitch nine Dotterel south of Choseley, taking me up to 120 species at around 15:30. 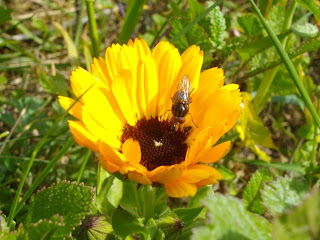 At Choseley Drying Barns the star was a Turtle Dove, feeding alongside Stock Doves, a Collared Dove and some Woodpigeon. Yellowhammer was an 'upgrade' from heard-only, and Corn Buntings were a relied have missed them earlier. We headed to Titchwell on 123 birds, with a seemingly good chance of beating last years total of 140 species. 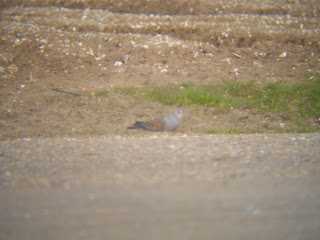 Arriving at Titchwell at around 16:00 we checked the sightings book before heading off to Patsys reedbed. Common Gull, Med Gull and Red-crested Pochard were all added from the bird screen, whilst there was another Little Ringed Plover and another Cetti's Warbler called but remained hidden. Scanning from near Island Hide we heard Bearded Tits, but a Turnstone, Great Black-nacked Gull and a Grey Plover west of the the bankwere the only additions. From Parrinder Hide a Little Stint eventually appeared, but we were still missing quite a few waders. We headed to the beach, and a scan out to sea gave us Sandwich Tern and Common Scoter, whilst a single Black-tailed Godwit and some Sanderling were on the beach. 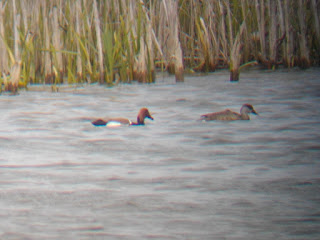 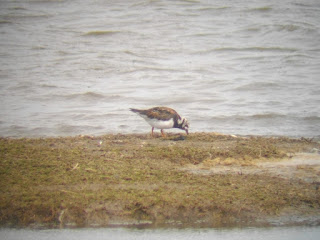 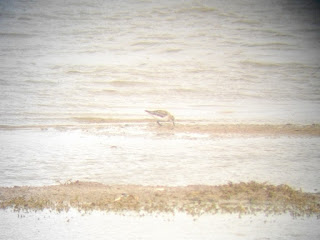 Leaving Titchwell we were on 135 species, and our options were running out for new ones. A stop at Gun Hill gave us Barn Owl (we had seen one earlier in the day, but it had been in Suffolk!) and Short-eared Owl. Another stop further along added Spoonbill and Pink-footed Goose, taking us to 139 with a couple of hours of daylight left. Surely we could do it from here.

Working out the commonest birds we still hadn't seen it became apparent that most were waders or seabirds. We had a quick look up at Kelling Heath, where a purring Turtle Dove was nice to hear, but no birds were added. Our hopes were pinned on Cley, but we failed to add any birds on the reserve, and only Black-headed Gulls and Sandwich Terns were moving out at sea. Rather than wait around and then attempt to see a Nightingale in North Norfolk we decided to return to the city early and hope that the male Peregrine would be roosting on the spire of Norwich Cathedral. We returned in just enough light, but despite trying multiple vantage points there was no sign of it (the other bird was out of site on the nest platform). We did manage our final bird, a singing Nightingale on the outskirts of Norwich.

So another excellent if frantic days birding, ending just short of beating last years total, and thanks in particular to Gary for driving duties.
Posted by James Emerson