On Thursday I went to the North Norfolk coast with dad. The weather was overcast and drizzly, so we saw very few insects, but did manage a few interesting bits and bobs. We started off at Holme Dunes, where there were a few Early Marsh Orchids along the entrance track. We also saw two small species of clover growing in the car park, Suffocated Clover and Bird's-foot Clover. These species had been mentioned recently in a blog by the North-west Norfolk Naturalists. [Edit] Note that it was Suffocated Clover that I saw, not Subterranean Clover as I had initially written - apologies for any confusion caused. 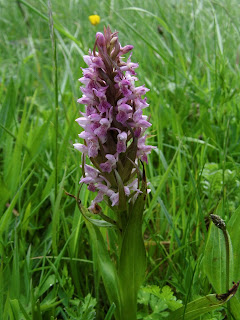 From here we headed to Thornham, stopping for lunch at Shuck's restaurant, based in a Yurt. The food was very good, albeit rather fancy for my taste (for example several options were served with aioli, which I'd never even heard of). They also gave you the choice of rustic or stealth chips. As much as I wanted to see what on earth stealth chips were, I was concerned they would attack me whilst I wasn't looking, so I settled for rustic ones.

The weather hadn't improved, so we decided to drive along the coast road and call in at Holt Country Park. When I used to come here regularly as a kid I had seen Bird's Nest Orchids here, but we failed to find any on this occasion - perhaps I was looking in the wrong place, or perhaps we just overlooked them. I did see one new species, a small soldier beetle that landed on Dad's hand, Rhagonycha limbata. 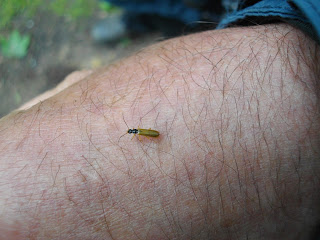