A diversion on my way to North Walsham took me through a small village where Jeremy had told me he had seen Butterbur in the past. This distinctive plant is somethin that I'd not seen previously and had decided to make an effort to see this year. It grows in damp places and as we drove past I spotted it from the car. Parking up and nipping out I found at least 20 flowering 'spikes' of Butterbur between the road and a nearby dyke. This plant has an eponymously named moth associated with it, but the flowers emerge before the leaves so there was no point checking for it yet.

Incidentally there is a commoner species found in a larger range of habitats is Winter Heliotrope, which can be seen growing along the River Wensum in Norwich just west of Pulls' Ferry. 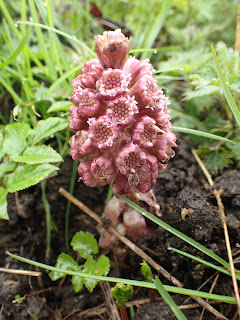 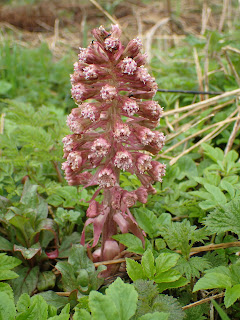 Email ThisBlogThis!Share to TwitterShare to FacebookShare to Pinterest
Labels: Butterbur