Following on from my previous post, another good way of seeing new species is to keep in touch with other local naturalists. This can be a good way of finding out what is about and where best to see things, but sometimes it does mean that you can 'twitch' something rare or unusual. Jeremy & Vanna keep a garden list of insects, which has been swelled recently by several insects emerging from their firewood pile. One such thing was a tiny longhorn beetle, quite distinctive because the wingcases are nowhere near long enough to cover the wings. The ID is Nathrius brevipennis, and is the first Norfolk record in over 100 years! Two of these beetles emerged - the first one died (they wouldn't normally emerge until later in the year), but I was kindly invited to go and see the second one. 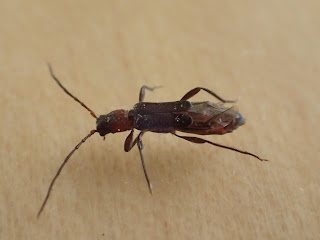 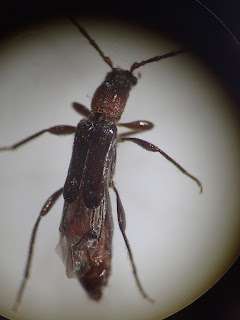