WHITLINGHAM: A few spring migrants and a new moth

On Wednesday afternoon we went on a brief family trip to Whitlingham. It was raining on our way there, and there was a heavy shower not long after. However, once the rain had passed we had a short period of sunshine, and that is when we got a glimpse of spring. Several Chiffchaffs started singing, and I heard my first Blackcap of the year. Cathy found another four birds, including a pair, all non singing but moving through the trees. Over the broad a Swallow skimmed low, but there was no sign of any House Martins, which would have been a new early record had I seen one.

It wasn't just the birds that were out. I searched a large patch of Coltsfoot that was covered by tiny beetles, and managed to find a single, rather bedraggled solitary bee, probably Andrena bicolor, but depsite being a common species it is quite difficult to ID with certainty (or it is to me at least!). The best sighting of the day was a moth that Cathy noticed fluttering in the undergrowth. It was definitely a carpet moth, but I thought it was too early for Common Carpet or Garden Carpet. Luckily I managed to get a wing shot, enough to confirm it as Water Carpet, a new species for me. 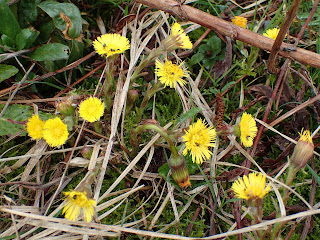 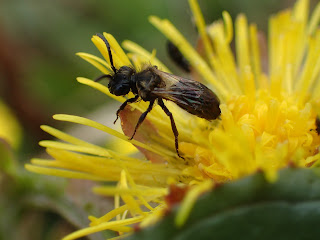 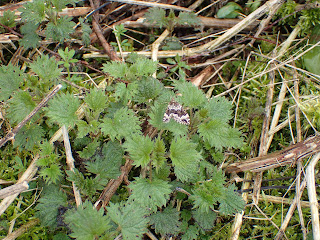