The recent rain has brought up a number of fungi in recent times, and they are a theme that will probably occur regularly in my posts through the next few months. Even for those with little interest in fungi identification, the sight of something spectacular like a Fly Agaric or perhaps a large Parasol is enough to make many people reach for their camera.

This post however, is not about a particular species, it is something of a plea for people to be sensible with regards to eating fungi. The catalyst was a post on the internet, that went something along the lines of "I've picked these, do you think I should eat them?" The answer (thankfully given by many people who commented) is of course NO! Whilst there are a number of edible fungi in Britain, if you are going to eat something you have picked then you need to be sure what it is. In addition to that, you also need to know how to identify any poisonous species that might look similar. In short, if you have to ask on the internet if something is edible, clearly you do not know exactly what it is and shouldn't be eating it.

Another issue, one that applies to internet identification in general, is that of course anyone can offer an opinion. The person answering your query could be a national expert, or someone with extensive knowledge of the particular subject. However, they could just as easily be someone who has no idea what they are talking about, or who has just made a guess. Even comments like "I ate something like this before and was fine" could give undue confidence to an uncertain ID. There are no consistent features that will tell you whether a fungus can be eaten or not - you have to identify it.

Around Norwich there are several poisonous species. Yellow-stainer Mushrooms (Agaricus xanthodermus) looks like any other mushroom until it is cut, and causes severe stomach problems. The Death Cap (Amanita phalloides) occurs at several locations nearby, including Whitlingham, and as the name suggests is fatal. Anyone picking mushrooms to eat who doesn't know how to recognise either of these species needs to have a serious think about what they are doing. Even if you are sure what you are eating, make sure you keep one back in case you do fall ill, as people can react in different ways to some species. 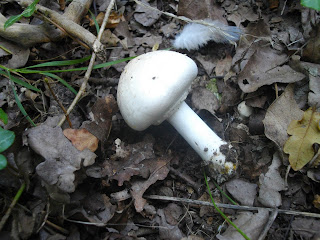 Back to more light-hearted posts from next week...
Posted by James Emerson