Around lunchtime I found out that a juvenile White-winged Black Tern had been found at Ormesby Broad. I had seen this species before, but not in Norfolk, so as I had some time free I thought I'd go and have a look. In addition to the straight-forward reasoning that I thought I'd enjoy watching it, White-winged Black Tern is probably one of only a handful of county rarity species that could realistically turn up (pun not intended) at Whitlingham, so having a good look at a juvenile seemed to be a useful exercise.

Arriving at Ormesby Broad (there is sometimes a bit of confusion around place names here - the place is Rollesby, north of the bridge is Ormesby Broad, south of the road is Rollesby Broad and further south is Ormesby Little Broad) the White-winged Black Tern was immediately on show although distant. James Lowen was already there, and having seen a photo very similar to one I took I think I was stood next to Kayn without introducing myself, so sorry if that was the case. Hirundines, mostly Swallows, swept over the broad in waves, although they were completely outmaneuvered by the tern, which twisted and dived with seemingly effortless abandon. It briefly perched up on the only frame available, but spent most of the time in flight. I did get a very distant record shot, but also took the opportunity to make a couple of sketches and take a few notes. 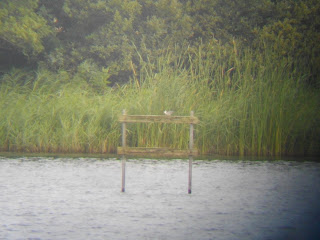 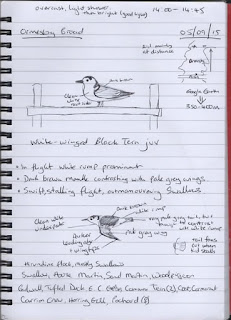