If you are given a book of moths to flick through and asked to pick a few that you would like to see, then I would suggest there is a high likelihood that one of the ones you would pick is the Death's-head Hawk Moth. Not only is it big, spectacularly marked and rare, it has also entered the popular consciousness as a result of featuring on the DVD cover of Silence of the Lambs and as an omen of death. Being a rare migrant to Britain, your chances of catching one, even if you regularly moth trap are rather slim.

I was having my lunch on Sunday when I saw on Twitter that a Death's-head Hawk Moth had been caught overnight in Westleton. I admired the photos, but thought little of it until there was a follow-up message that it was being taken to Minsmere from 14:30 and would be available to see until the visitors centre closed. Given the limited opportunities to see one I was keen to go, and luckily Cathy wanted to go too. I went out and hurriedly did the shopping before we set off for Minsmere.

As we drove towards Suffolk it started raining heavily, which slowed our journey slightly, but we made good progress and reached Minsmere at about three. On arrival the moth had been taken to cool down as it had started fluttering, but after around 20 minutes the Death's-head Hawk Moth was brought back, perched on a Silver Birch log. It seemed unpurterbed by the attention from admirers and photographers, and everyone present at the time managed to get a good look at it. Our thanks go to Clive who trapped it, Matthew who tweeted instructions and the staff at Minsmere for accommodating the extra visitors. 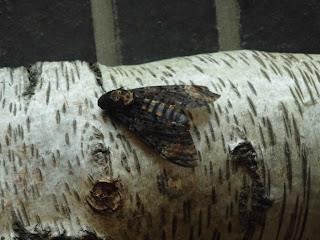 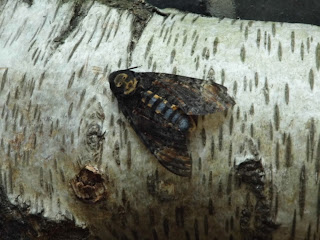